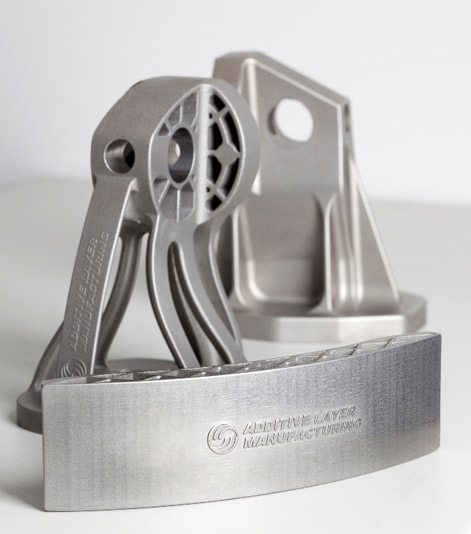 “At the EADS labs in Filton, U.K., researchers demonstrated that they can print out several different metal parts for airplanes with a technology that uses a laser to heat  metal powders until they form solid metal shapes. Using this technique, EADS has printed metal hinges for engine covers: the hinges allow the covers to swing open for engine maintenance. The parts have intricate shapes that maintain strength while cutting the weight of the part in half. The new hinge has been put through the tests used for conventional parts and shown to meet performance requirements. ” Selective Laser Sintering, or the process of fusing tiny metal particles by laser – one layer at a time. EADS Innovation Works.

“According to EADS, reducing the weight of an airplane by just one kilogram can result in fuel savings of $3,000 per year, or $100,000 over 30 years—the typical life of an airplane.”

The report highlights current limitations on 3D printing; including lack of ability for fine temperature control and maximum size restrictions. However, the good news for 3D print technology development is, as the aerospace industry’s potentially vast appetite for this tech grows – we may see demand for larger, faster and cheaper printers. This should accelerate the trickle down effect for other industries and consumers. At the moment it appears they are concentrating on testing and optimising existing parts – aerospace engineers have already expressed interest in biomimicry. 3D printing should free them to further explore bio-mimetic structures, perhaps in the future we’ll have aircraft wing structures printed based on organic cellular structures found in birds wings?

David is an industrial designer from Wellington, New Zealand. He contributes weekly 3D print articles for Ponoko. You can follow him on Twitter @dizymac