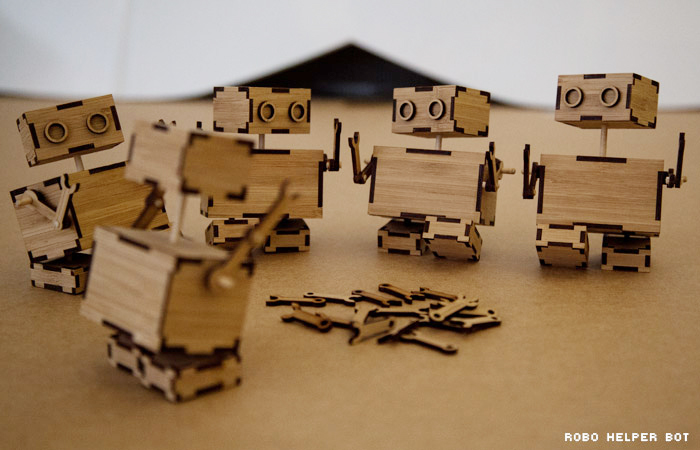 Charles Wade is a busy guy. He works at a newspaper in North Carolina doing graphic design, web development, social media, and IT; and teaches graphic design and multi media at a nearby college.

But despite his packed schedule, Charles was able to start a product line in time to sell at a local festival. “I basically worked a full time job, a part time job and at the same time developed all of these ideas,” he says. “It’s hard to make time to get the materials I need, go to the shop (most are 1+ hours away) and manage all of those things while working as much as I do.”

So in order to get his robots ready, Charles decided to use Ponoko’s laser cutting service.

“Ponoko gives me the ability to order things whenever I want and get it delivered straight to my door,” he says.

Charles had previously designed several paper crafts which he used as a starting point for his laser cut designs. “I took the paper craft elements and reconfigured them into wood crafts,” he explains. He then ordered the laser cut parts in bamboo.

Charles fully assembles the wooden parts, and each piece moves independently so you can pose and animate your toy. For those that want to put the design together themselves, he plans to offer DIY kits for sale too. (Of the sixteen animals in his ‘bamboo creature army’ my favorite is the goat and the pig. $30 on Etsy)

He’s also got brand new products available in preparation for holiday sales. “I actually just got some things in the mail on Thursday. I’m making cute and silly charms for necklaces and such,” he tells me.

ROBOMUSTACHE products are mostly sold at craft fairs and festivals, but you can also purchase from the ROBOMUSTACHE Etsy store.

Interested in starting your own product line? Learn how to make stuff with Ponoko — and like Charles, you’ll be ready to start selling your designs just in time.

How many attempts does it to make your first model fit? I am sure I would end up with just useless scraps of bamboo. What is the learning curve like? Is it after the first order that you learn everything or does it take 10,000 hours to be an expert.

Hey Tim,
I won’t answer for Charles, but having asked this question to several customers — it depends on lots of stuff. The first factor would be how complex your design is. For new folks, we encourage flat designs like jewelry, coasters, ornaments etc.

But lots of people do make 3D, interlocking designs. So the second factor really comes down to your design skills. We’ve had engineers who’ve nailed it after a single prototype. http://bit.ly/12PMqSu We’ve also had skilled designers still need 10 or so attempts to get it right: http://bit.ly/YLXdYe But the average is probably about 3.

The third factor is your material choice. Something like felt or cardboard has some give. Working with wood or acrylic is more challenging. Check out these tutorials on creating interlocking designs: http://bit.ly/1auvWQq

Tim,
The creatures I had actually made variations of them in the past out of single weight illustration board, just as a test, but they didn’t interlock like the latest iterations do.

As far as how many attempts, it was the first try. I picked out a material that I wanted and checked the thickness of the wood. Then it was just a matter of figuring out how all the boxes should interlock. I did a couple of paper print outs, cutting them out and sliding them altogether just to make sure.

The robots I’ve done have all been on the fly with no tests whatsoever. I’ve learned from the creatures and how they fit and flow to then make things with moving parts, ie; my robots.

After I ordered the first sheet, which was 4 creatures, I learned from it all. I learned how to optimize space and get the most out of the material and at the same time make thing better.

The only downfall with perfectly interlocking parts is that when you’re dealing with certain materials things aren’t always the same thickness. Bamboo for instance, it’s supposedly .106″, but it can vary slightly. So if it is too thick then the interlocking pieces don’t like each other. My robots don’t have much of an issue when it comes to that because they’re a bit different.

It all really depends on the person though. I have a graphic design background, but not much wood working or anything like that. It’s just intuition to learn more and try different things. Obviously I’ve spent a great deal of money, messed up some, but I don’t feel like it has been a waste at all because I was able to take every time I messed up as a learning point.