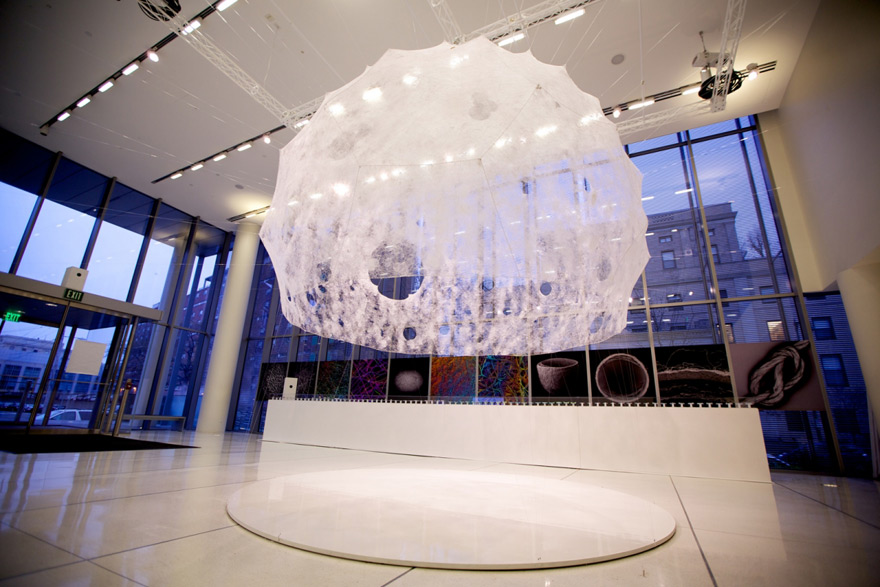 Algorithmic design, digital fabrication, and silkworms work together to make a pavilion. MIT MediaLab’s Mediated Matter group used inspiration from the cocoons of silkworms for the Silk Pavilion. Silkworm cocoons are made from one long, continuous silk thread. The pavilion uses the same approach, but with some high-tech help.

A single silk thread was placed by a Computer Numerically Controlled (CNC) system following a subdivision algorithm. A program divided the pavilion into sections with the thread, divided those sections into smaller sections, divided those again, and so on and so forth until the temporary scaffolding was covered.

After the CNC was finished, real, living silworms were placed around the bottom edge of the dome and left alone to finish the pavilion, filling in the remaining small holes and binding together the CNC-placed thread. Once the silkworms completed their job, the scaffolding was removed. The result is a pavilion made entirely from silk. Taylor Gilbert is a proponent of creative technology including Arduino, Processing, and repurposed hardware. Follow him @taylor_gilbert