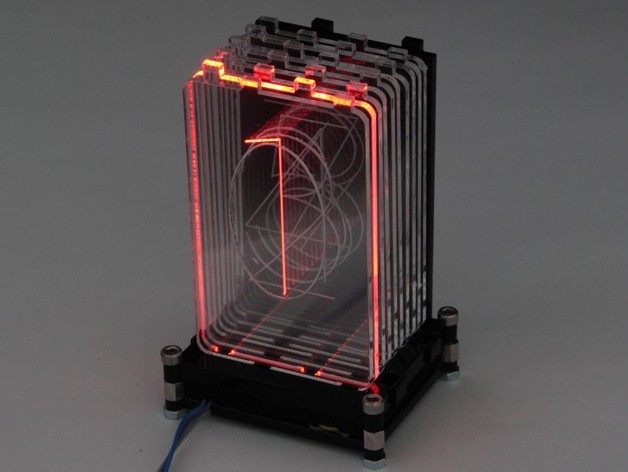 For retro-loving tech-heads, there is almost nothing quite as mesmerising as the soothing glow of those iconic nixie tubes. Their illuminated typography with refined, crisp fonts traced out in delicate filaments evoke an era of technological optimism and mysterious futuristic endeavours.

Inspired by this iconic visual, Thingiverse maker Folker has created a 21st century interpretation using laser cut and etched acrylic. Each number is etched onto a laser cut panel, and illuminated by an individual RGB LED. All characters from 0-9 are then laminated together to form one digit module. Pictured above is a prototype for the resulting clock/calendar device, also published on Thingiverse.

You can click through to see clips of the numbers ticking away as well as the smooth transitions as the LEDs phase through their full color range, thanks to some clever programming. Interestingly, the filament-thin fonts referenced from the original nixie tubes are quite similar to modern design elements that appear on popular i-devices. Those fashion cycles keep on repeating!

As we see here, using LEDs for illumination of laser etched designs can create a bold, distinctive visual impact that is a welcome change from the brightly lit screens we have become used to. How would you use this technique in your designs? Jump into the Ponoko Personal Factory and try it yourself!

via Folker on Thingiverse: Single and Multiple RGB Acrylic Nixies