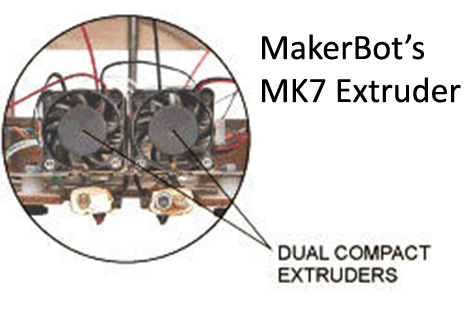 Print in multiple colours or materials on a hobbyist 3D printer MakerBot Industries is set to launch a new dual-material extruder today, according to co-founder Bre Pettis.

Except for some experimental work, hobbyist 3D printing has traditionally been limited to a single extruder. That has meant printing in only one colour or material at a time. But with the launch of the MK7 extruder, users will be able to print with two colours or materials in a single object.

Why multiple materials? Some commercial 3D printers that use a similar FDM process have an optional water-soluble support material to assist in creating complex objects. Imagine 3D printing the letter “T”, standing up. At the hobbyist level, on reaching the crossbar at the top, the extruder would drip melted plastic into empty space, ruining the print. Or, at best, there would be a thin support underneath made of the same material as the actual object, making removal a problem.

For example, here is a skull from Thingiverse printed on my own MakerBot with same-material support: Dual-colour objects will be interesting, too. Any models that have text embedded in them would really pop, and many others that are uploaded to Thingiverse in multiple parts will be able to be combined into single prints.

It’s not certain yet if it will be practical to print objects using ABS and PLA at the same time, but more details should emerge later today.

That was ridiculously fast for a blog post, awesome.

That NYT graphic is really cool.