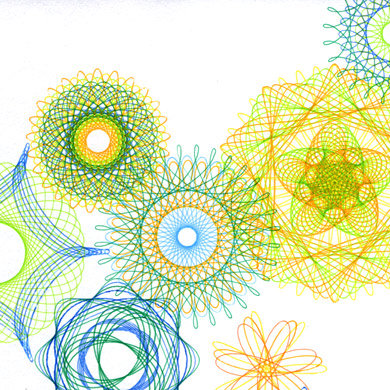 Giving the Spirograph a new identity Seattle based printmaking artist Morgen Bell was on a lookout for a project after finishing art school, so when she came across a reference to Ponoko on someone’s blog, she decided that it was the perfect opportunity to try out laser cutting.  Until then, exacto knives and jewellers’ saws were her fabrication tools.

How did this Spirograph business come about?

In the early spring of this year, I’d been playing with a couple of old Spirograph gears I’d unearthed while cleaning. I was a huge fan of Spirograph in my childhood, and I wished I could have my old set, which was a really old version—old enough to still use those wonderfully dangerous little green pins. But it was long gone, and I was sad to discover that the new ones available are really lame. So I thought I should try making a few gears, partly to learn how the cutting process worked, and partly just because I wanted to play with them.

Also, it was a chance to fix something that had always bugged me about the original Spirograph: the pen holes never lined up consistently. You’d try to follow the instructions in the booklet, and it would come out all weird. I’m the kind of fussy person who’s annoyed by that kind of thing, which I realize is ridiculously obsessive, but I knew that if I could make my own gears, I could put the pen-holes exactly where I wanted them. This was an exciting idea. (I probably need to get out more.)

So I pushed vectors, and had some gears made, and tinkered with them a bit, and then made a few more, and pretty soon I was up to my ears in loopy drawings. Then some friends pointed out, “Hey, these are fun, you should offer them for sale in case somebody else out there might want to play too.” At that point, I wasn’t taking it particularly seriously, so I gave it a silly name: Velocipede’s Cycloidal Scribbling-Engine. As I’ve been using it, though, I’ve found that it’s a surprisingly good tool for exploring color and pattern. It turns out that cycloid curves have been used in decoration for a pretty long time: definitely in the Victorian era, probably earlier. Faberge used similar processes in some of those famous enameled eggs. So far, I’ve only used transparent acrylic. It’s good for making gears, because you can see what’s under it, and line up your drawing accordingly. I think it would be cool to make a set of pieces using that fluorescent kind of acrylic that looks like it has glowing edges.

I do also have some possible plans for things made of cardboard. I’ve done a bit of cardboard architecture in the past, sort of glorified refrigerator-box castles, all cut by hand with a mat knife. Using laser-cut pieces would be a lot easier, and would allow for all sorts of interesting geometric constructions like onion domes. Tips for making with Ponoko?

If the shape is critical in any way, make printouts before you send the file to be cut. Check to make sure that it fits. Check it again. Then get some sleep and check it one more time, just to be sure.

You can purchase a Scribbling-Engine from Mr. Velocipede’s Ponoko showroom. Prices are $35 for the various plates and $99 for the starter set. An awesome gift for the doodlers and scribblers in your life. 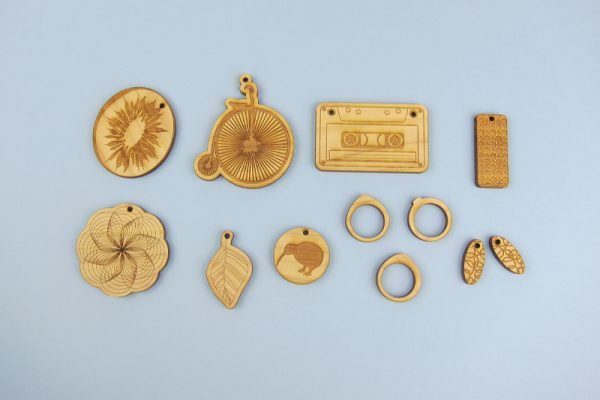 Get Inspired With This Latest Addition To The NZ Catalog Wood is the second most used material for laser cutting because of its natural beauty.…

This is one of my favorite Ponoko projects. I know everyone gets hyped by like, an entirely lasercut flat pack house with LEDs that 3D prints new trees or whatever, but I just love how simple this is. And I love that it leads to drawings. Great stuff Morgen! Thanks for the post Yana.