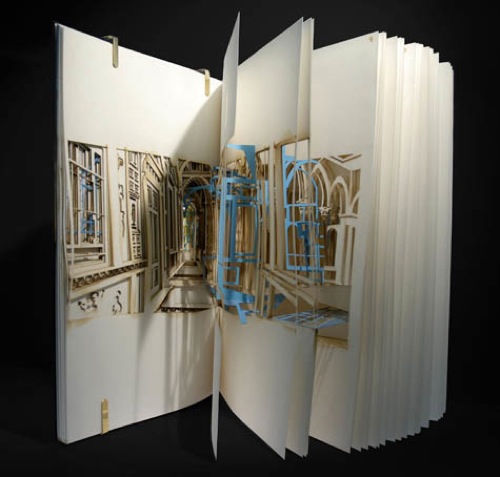 The complexity of the project is quite astounding with so many finely cut layers it would be such delicate work but the result is superb. Anyone using Ponoko could conceivably produce something along these lines out of paper or cardboard without to much cost due to the speed which both materials can be cut.

Here is Johan on the inspiration for the project.

How To Make Bookmarks

Everything you need to know about making bookmarks.

The inspiration came directly from the single shot film sequence in Sokurov’s Russian Ark, where the camera is taken through the timeless spaces of the Winter Palace, jumping decades from one room to another. The distortion of time is, of course, interesting in terms of the timelessness of the spaces but I was interested in the way that the camera never looks back. Even though the viewer never sees the full dimensions of these spaces, we are still left with a sense of coherence and wholeness. But what if the back of the room was mindblowingly different? It’s as if we constantly use the previous space to create an understanding of what should be behind us.

The book is an attempt to spatially prolong that perceptual idea. Two different spaces from the film sequence have been cut into each half of the book, as constructed perspectives. When the pages spread, the silhouettes of the elements visually collide, and the space within the book changes in character as the user travels through it by flicking through the pages. Johan Hybschmann, a recent graduate of the Bartlett School of Architecture.

I saw this earlier and the amount of work needed to pull this off must have been mind numbing.

Its amazing. Must have taken dedication and patience, but seems to have paid off in the end!

Wow that is impressive

ohhhhh wow! This is so beautiful and totally up my alley!

I have always wanted to do something like this in a book! I started one, hand-cut, in an altered book of a walk through a forest path, but I have other ideas.

Is ponoko offering paper now? Or is it a prime on-order thing?

I would love to see any pics of the altered path, especially interesting to see a laser vs hand cut version..

It was really just a test for me, this forest in a book. And I liked the way it turned out, but it was in no way a finished project. I only put some colour on the first page using cheap markers. So please do not judge for artistic content 😉

How would like to see a picture of it? email?

submit it via the link in the topish right side of the page.
there is a link to an email address where it says