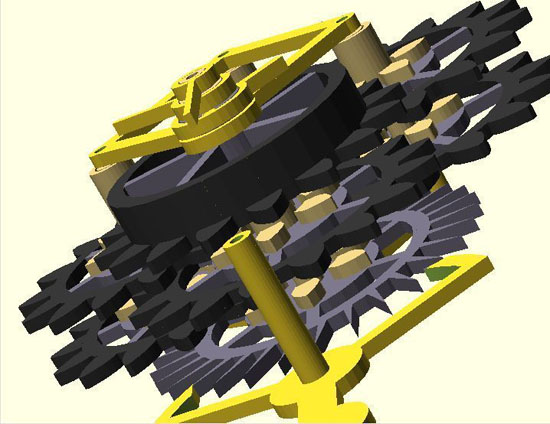 “It started out as an attempt to understand escapements, a critical component of mechanical clocks with centuries of design history. I modeled one and it’s interaction with the next clock component in OpenSCAD.”

How To Make A Clock

Everything you need to know about making a clock.

The community generated buzz around these couple of components inspiring syvwlch to take it much further.

“It hadn’t occurred to me to model the entire gear train, let alone shoot for a printable, working clock, but between the response the escapement was getting, and how much fun I was having, it kinda snow-balled from there.”

He utilized a number of resources in the build process. Armed with information from the net, library books and community collaboration providing vital feedback and prototyping. Time was saved with OpenSCAD’s procedural modeling and the MCAD library all instrumental throughout the iterations. He also stresses the importance of continual prototyping… “By posting those intermediate steps, the design stays in sync with the community, I don’t lose momentum and the goals for each release stay realistic. Lately, as people have started printing these out and reporting on what works and what doesn’t… it’s become a great way to fix what can’t be modeled in the virtual world.”

With many iterations required to refine the design, OpenSCAD was invaluable in the design process. Unlike 3d modeling software – OpenSCAD is actually a compiler of 3D scripts. “The whole thing was written over two weeks’ worth of spare time in OpenSCAD, as a code-like, fully parametric design, no imported parts… Makes it easy to change the overall shape of the clock, the number of gears, their ratios, all the tolerances, etc… Tweak a parameter, fix a design bug and hit compile.”

“You have a pendulum with a given period, and the escapement that ticks twice per period. A succession of gears slow that down to seconds, minutes and hours. The only wrinkle was that the 3D printers I was now aiming for can’t do very small teeth on the gears, so I couldn’t use conventional ratios. Instead of decomposing 60 into 6 and 10, I went with 5, 3, 2 and 2 for example.”

When asked about future development, he mentions its still undergoing development and a little buggy at this stage. He’s hoping to fine tune the design. But has other plans ticking through his mind too. “I’d like to make a spring-driven version, try more advanced escapement designs, alternate configurations, etc… I’d like to try my hand at a model of the 10,000 year [old] clock, from the Long Now Foundation, assuming they [will] allow it.” As its only been a few weeks in development getting it to this stage I suspect we’ll see these developments sooner, than later.

If you’re interested in syvwlch’s clock or clocks (there are many concept iterations) the .STL and OpenSCAD files are available under Creative Commons license to download and develop further from Thingiverse.

Its a great example of whats possible – he had never used OpenSCAD, nor designed a functioning clock prior. We hope when it is ready you’ll make it available on Ponoko! Thanks syvwlch, we’ll be watching with interest.

Thank you, we’ll definitely put it up on Ponoko when we have all the bugs ironed out.

Latest news is that the wonderful team at MakerBot Industries, makers of the CupCake and Thing-O-Matic 3D printers, have decided to give me one of their machines, free, for the work on the printable clock.

Now I really have to finish, so I can print a clock of my very own… 🙂