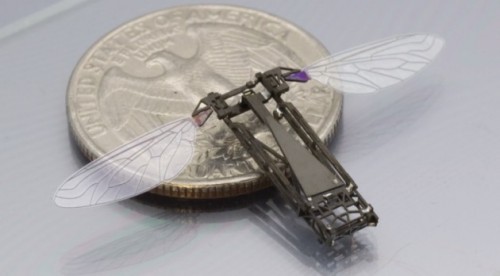 Just in case you weren’t already having nightmares about swarms of miniature robots coming to get you, researchers at Harvard have been working on construction techniques for the Robobees project.

Taking inspiration from the way that pop-up books form structures from layers of flat material, these flying robots rapidly transform from a flat substrate into fully assembled electromechanical devices.

Building upon techniques widely used in the manufacture of printed circuit boards, multiple layers are laminated to provide different structural and mechanical functions for both assembly and functioning of the final object. A laser cut assembly scaffold aids in the pop-up construction, with multiple interior linkages that become either integral joints or weld points for the three dimensional structure. Incredibly, the scale is at such precision that integration of electrical components is a natural extension of the fabrication process.

Click through for a few videos of the mechanics behind it all.

This remarkably versatile process for creating machines at millimetre scale has far-reaching potential, and it would appear that (for now, at least) the future of humanity is still safe –

Essentially, tiny robots can now be built by slightly bigger robots. Designing how all of the layers will fit together and fold, however, is still a very human task.

Combine this mechanical know-how with the Tinysaur, and my own childhood dreams will all but come true.

It may be a while before these innovations filter through to the DIY community, but in the mean time you can read more about how it all works in the following Harvard School of Engineering and Applied Sciences press release.