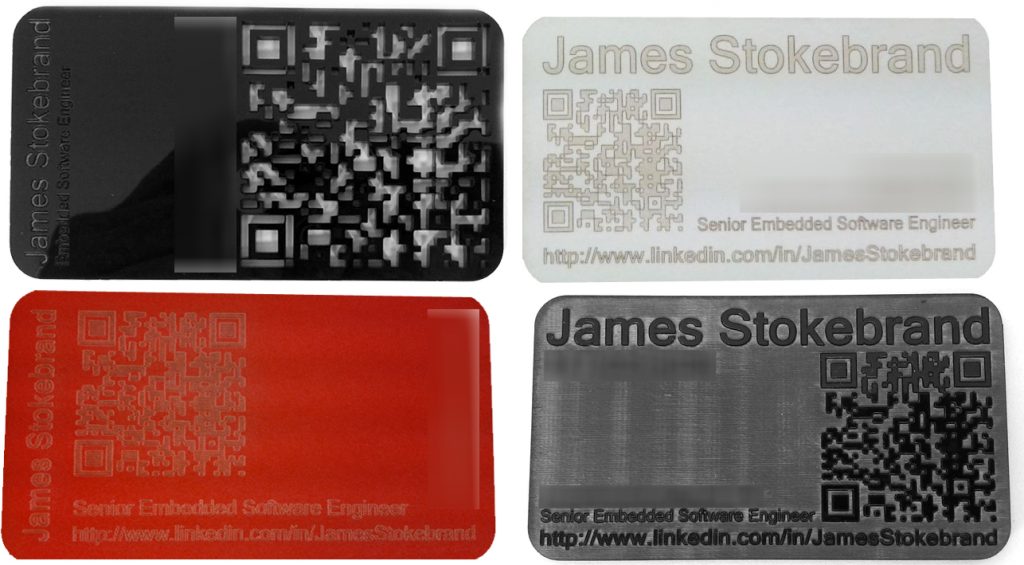 “I was laid off in April 2011,” James explains “but I prefer to stay busy so I got the idea to create business cards with a QR code to my LinkedIn profile.”

But the first try was far from perfect. The cards were too big, corners were too sharp, and the text alignment was off. (The blurring in the images is for James’ privacy, not the result of the lasercutter.) The second cut fixed most of the problems with the first round, but the cards — made of 3mm black acrylic — were too thick.

“I went on interviews and passed out this card. It didn’t go over well… (laugh). My career and training is in software engineering, and the people who would be hiring me aren’t impressed with business cards,” James explains. “But I still found a job a couple months later.”

Fast forward a year, and James has come back to his lasercut business card design, which he’s calling Project Vanity on his blog Misadventures in Software.

He tried out some different design layouts on clear acrylic which comes in thinner sizes. “Unfortunately, using clear acrylic makes it impossible to scan the QR code. So for business cards, these make interesting failures,” James says.

Another mishap was using PETG, a clear and flexible but delicate plastic. James took his invisible, broken cards in stride: “What can I say. The cards are invisible! PETG isn’t a good material for business cards.” His next experiment turned out better, resulting in an embossed look by cutting away the background instead of the design. “The cards look great, but it took quite a bit of cleanup to make them presentable,” James notes.

When cardstock was added to the materials catalog, it seemed like a natural fit for a business card. He tried out all three cardstock colors, adding a vector line engraving to the design on the white ones. “I think this made the [white] cards stand out over the black and the red,” he says. “But the QR codes don’t scan because there isn’t enough contrast between the code and the paper.” Then James came across the QR Code Stencil Generator, a program originally developed by the team at F.A.T. (Free Art & Technology) as part of a 21st Century update to hobo code communication. He used the Stencil Generator to make some new versions with the QR code completely cut out instead of engraved. For those of you interested in creating your own lasercut business cards with Ponoko, James has some sage words of advice:

1) Always print the design on paper to ensure that its the correct size and configuration.

2) Round the corners of the card. Laser cut corners can be quite sharp.

3) Pay attention to text and graphic alignment. This is subtle but important to making a good design great.

4) Don’t forget to convert your text to Paths!

5) Never give up. Just because your first design may not be as good as expected doesn’t mean that it can’t be improved or updated.

By the sound of it, there were issues with the acrylic, PETG, and cardstock?
I’ve been looking for a material that would lasercut flexible stencils without too much melting. Any ideas?

Was a fun story to read, thank you for sharing! To create a business card of an appropriate size, a business card template can be used. Many printing companies have them on their websites. Or just measure a traditional card and create your own. I actually had the same idea – to cut QR codes out, so I was glad to see that it works.

Michael Caston,
The acrylic and cardstock materials are more britle materrials. The PETG is flexible but it seems to shear in ways that are annoying.

Can you define what do you mean by “flexible”?

I’ve got a material sample for the 0.5 mm silicone that is very flexible, but it is easily deformable (IE it stretches):
http://www.ponoko.com/make-and-sell/show-material/143-silicone-clear

I see there is also a 1.5 mm black silicone that is just as flexible/stretchable but thicker:
http://www.ponoko.com/make-and-sell/show-material/383-silicone-black

Or you might try leather that is flexible but doesn’t stretch/deform as much as the silicone:
http://www.ponoko.com/make-and-sell/show-material/256-leather-vege-tanned-auburn

Michael C,
Delrin makes WONDERFUL stencils. I have used it may times, especially the thinner materials. I use the white delrin, mostly the 0.125″ thickness (for flatness) but I’d imagine that even the 0.032″ thickness would work well. Delrin is flexible but doesn’t deform. It has a slick surface: even Sharpie permanent markers don’t stick to it. It’s a little more expensive than acrylic, but I only make one stencil and use it lots of times.
Business cards would be cool, too. Maybe in black delrin.

James,
To answer your question about a “flexible” material. I’m looking for a flexible material as in the material that might be used to make stencils (which are usually die cut). But won’t melt (deform) when cut with the laser. to make the shapes for something like this poseable figure:
http://www.amazon.com/HUMAN-FIGURE-DRAWING-TEMPLATE-POSABLE/dp/B004NTRJEY
Thanks.

Michael Caston,
Yes, I understand now. You shouldn’t have any problems using acrylic or cardstock for the poseable figure design. Cardstock will probably be a little fragile for that , but acrylic will cut smooth if you don’t cut the details too small. The thinnest arylic material that Ponoko USA has is the 1.5 mm clear. Or you could use Delrin which has a 0.8 mm thickness.

Martin Mucciarone,
I’ve never tried to make a business card out of deltrin. When looking at the material samples on the Ponoko USA site, I didn’t think the text was as crisp and detailed compared to acrylic. I think that acrylic holds those sharp edges better and makes smaller details stand out.

James and Martin,
Thanks for the advice. I’ll have to give Delrin a try. I’d be afraid the acrylic might break and leave sharp edges. If Delrin is flexible and doesn’t deform under a laser, then it sounds like the right material for the job.

Delrin makes nice stencils. I have used it may times especially the thinner materials.

Out in Ponoko New Zealand they stock some great material for various kinds of stencils: 0.1mm Mylar. It doesn’t deform at all when laser cut, and is fairly durable as well. I use it for PCB Stencils (applying solder paste to a PCB) where extremely fine detail is required but involves metal tools scraping across the material.

Works fantastically well. May do what you want as well.