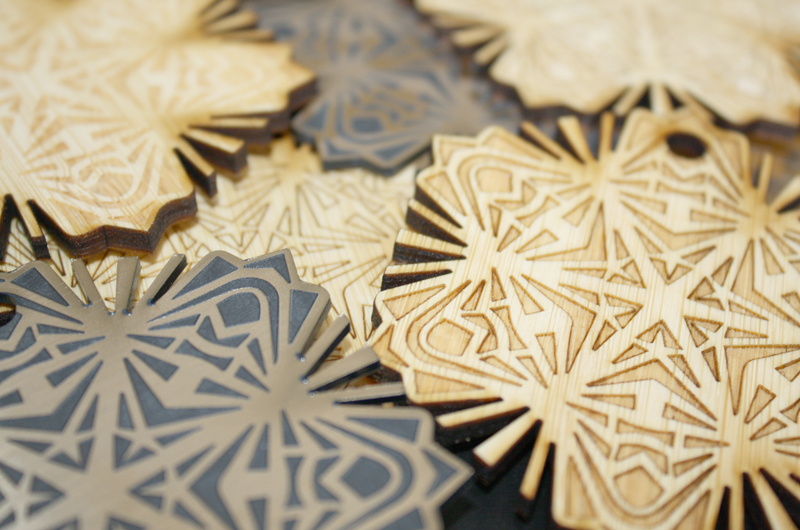 Laser engraving: It turns basic laser cut designs from ordinary to extraordinary. But this added style, beauty and impact can significantly increase your design costs. To be able to achieve excellent design while staying on budget, you’ve got to get smart.

This means you’ve got to get smart with how files are built…and this may take some detective work to determine exactly where there are opportunities to tighten up a design that saves time—and money.

But does getting these laser engraving costs just right seem like a mystery that can’t be solved? You don’t have to be Maxwell Smart, Inspector Clouseau or 007 to solve this case. We’ve done all the legwork for you…and it didn’t require a clandestine impossible mission or an enigmatic decoder machine to get the files.

When setting up design files, what you’re really doing is giving a set of instructions for the lasers to follow. As such, you want to be smart not only in how you incorporate laser engraving into your designs but also in how you build the file so the instructions are the most efficient as possible.

To visually understand the difference between each engraving type, let’s look at a side-by-side comparison of two of our most popular materials: Amber Bamboo and Black Acrylic. 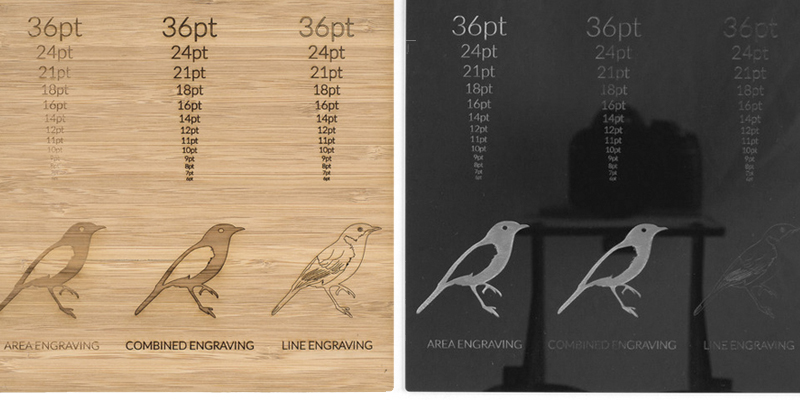 Line engraving (far right of each material image) is best on wood because it burns the material to create a warm contrast and very clear outline of the shape. On acrylic, this contrast is less obvious because the laser slightly melts the material, softening the line edges and making the overall outline of the shape less crisp. This is especially important when line engraving text, as readability can become an issue.

Area engraving (far left of each material image) is more striking on acrylic because it has a beautiful frosted finish that creates great contrast. The effectiveness of area engraving on wood can be impacted with the grain of the wood, and it generally has a softer effect when compared to acrylics.

So which style of engraving is best? It depends, of course! It depends on the design style you want to achieve balanced with the budget you want to spend.

To help you decide, we’ve created this tutorial using an intricate snowflake design that we’re going to make in blonde bamboo as well as brushed gold on black acrylic to see how these materials react to the three laser engraving processes.

Vector line engraving is fastest for simple shapes, especially if they are large forms such as a border around your design.

In this design file, red denotes what is to be line engraved. The laser uses the red lines as instructions to essentially draw the shapes. As noted previously, line engraving is most effective on the bamboo example because of the strong contrast the branded edges of the lines. The line engraving on the brushed gold on black acrylic is so fine that the detail is difficult to see.

Maker Tip: Keep in mind that line engraving is restricted to very thin lines. The width of the line in the design file is 0.01mm so the laser can interpret it, but the actual width of the engraved lines that result on the material are determined by the width and power of the laser beam. Typically, engraved lines are approximately 0.15mm, but it varies with materials. Because this width cannot be changed, build your files accordingly.

Area engraving is treated much differently than line engraving. Essentially, area engraving colors in black-filled shapes by going back and forth to remove tiny lines of the material. The laser moves down the sheet, engraving it incrementally.

With how much area is touched by the laser, it shouldn’t be a surprise that area engraving is generally time consuming. More making time = more making costs.

If you have a sheet full of detailed designs, however, area engraving might actually be faster than lots of line engraving. And it can also be the best choice for visual impact because wider areas can be engraved. Thus, if the goal is to produce more visible contrast in your objects at a distance, area engraving is the way to go.

Just check out how beautiful our example snowflakes are with area engraving. The wood has a softer natural beauty in the detail where the acrylic has a more bold style.

Alignment is key for area engraving. Keeping parts close together and aligned horizontally will help reduce the travel time and laser engraving costs.

Configuration of parts is also important for area engraving. If the design file contains a large border or parts on the outsides of the sheet to be area engraved, then the laser has to travel much further to cover all the pieces. More travel time = more cost. Look at placing all parts that are to be area engraved within close proximity of one another and also consider nesting pieces to get the most efficient configuration.

To illustrate the point, let’s compare two design files: One with the parts spread out and one where they’re together. In the first file, the snowflakes are positioned in the four corners of the sheet, far away from each other.

With this configuration, the laser has to travel the entire length of the sheet to engrave the parts. As such, the making costs are $41.73.

A better way to configure the parts is putting them adjacent to each other, as in the second file.

With this set up, making costs drop to $21.90—nearly half the cost of the first design file—simply because the laser travel time was reduced.

While this is an extreme example, it clearly communicates the impact travel time has on the overall cost of a project. By keeping the design elements tightly configured, engraving costs can be reduced.

Maker Tip: Be aware that covering any blue lines for laser cuts or red lines for line engraving with objects that contain a black or white fill will not stop the blue or red lines from being cut or engraved. These lines are still communicated to the laser within the overall file set up and the machine knows where these lines are.

To avoid having lines in the middle of a design like this, combine the overlapping rectangles in your file to be one part. This tutorial on how to do this in Illustrator can help.

As the name suggests, combined engraving is using both line engraving and area engraving together to achieve the most dramatic effect.

Combined engraving will be the most expensive option because the laser area engraves first then line engraves. However, it often gives the best definition—and is the most beautiful. This is especially true on wood materials where the color of the grain can vary or where there are skinny sections within the engraved areas (less than 0.5mm wide) that might skipped when being area engraved.

Now that the basics of laser engraving have been explained, let’s put the principles into practice. For the next part of the tutorial, we’ve created a basic sign in addition to the snowflake design to demonstrate how line engraving, area engraving and combine engraving actually price out.

Pricing A Basic Sign With Text And Exterior Border

For this example, we’re using 3.0mm black acrylic to create a basic sign that’s 790mm long x 348mm wide. The material cost is constant at $21 for each design.

To investigate this scenario, let’s jump in and begin with the full whammy: Combined engraving.

The making costs for using combined line and area engraving are $186.83. Got sticker shock? Yeah, that’s a bit much for such a simple sign. So let’s go from the most expensive option to the least expensive option.

For a simple sign such as this one, using all line engraving will always net the best laser engraving cost.

Great price. But using a line engraved design might not have the visual impact necessary for the text to be seen at a distance.

To create more contrast—and better visibility—for the sign, area engraving could be a great way to go. But what about the cost?

That pumped up the price, didn’t it! To create this sign using area engraving, the making price jumps up to $165.87. So while this is a slightly more economical choice than the combined engraving scenario, it’s still significantly more than simple line engraving.

So what’s the secret to designing a sign that has good visibility at a distance but is also friendly on the wallet? What if we changed the border to line engraving and kept the letters area engraved?

That looks a bit nicer, doesn’t it! With this final scenario, the making price drops down to $42.60. A nice compromise. The goals of readability + budget friendly have been achieved. Mystery solved.

Maker Tip: If making with wood, using combined engraving on text only will improve the sharpness of the letters without overly increasing the laser engraving cost.

We designed the snowflakes used throughout this tutorial when we were inspired by the 1.5mm brushed gold on black acrylic that was introduced to the materials catalog last year. It’s a beautiful substrate that really lends itself to the detail found in the design. But which kind of engraving nets the best price for this design? Let’s investigate.

As in the previous example, combined engraving results in the highest making cost at $87.07. No surprise. So it really comes down to line engraving vs. area engraving.

But here’s a little known secret: With a detailed design such as these snowflakes, area engraving is actually the lowest cost when quantity are made.

In this example of eight snowflakes on a sheet, the making price is only $45. That’s a saving of $12.50 when compared to line engraving and $42.07 less than combined engraving.

So why was line engraving the most affordable on the sign example and not the snowflakes?

When a design is extremely detailed, such as the snowflakes, it takes a lot of time to engrave a high number of small lines. Additionally, the laser line engraves one object after another individually. The time per part is not reduced by making multiple snowflakes, thus the cost is amplified the more pieces that are made. Remember: The higher the making time, the higher the cost.

With area engraving, on the other hand, the laser travels back and forth across the sheet in a linear fashion. This means that multiple snowflakes are produced simultaneously (unlike one at a time with line engraving). So adding more parts only increases travel time a little, thus saving time in comparison to line engraving.

Maker Tip: When area engraving, make sure each space is substantial enough for the laser to recognize it. Small bits can inadvertently get skipped with this engraving technique. Avoid this by keeping area engraving sections wider than 0.5mm.

Confidently Reduce Laser Engraving Costs On Your Next Project

Do you feel a smarter now? Hopefully these cost comparisons have helped take the mystery out of laser engraving. For your next project, tap into your inner secret agent man (or woman!) and try creating design files using each engraving technique to get a quote. You just might be surprised how you can reduce laser engraving costs to meet your budget needs while still achieving aesthetic objectives.

Was this tutorial helpful? How has the info in this tutorial changed how you set up design files or make design choices? Let us know by leaving a comment below!

Great article. Are you basing the laser costs at $1/minute?