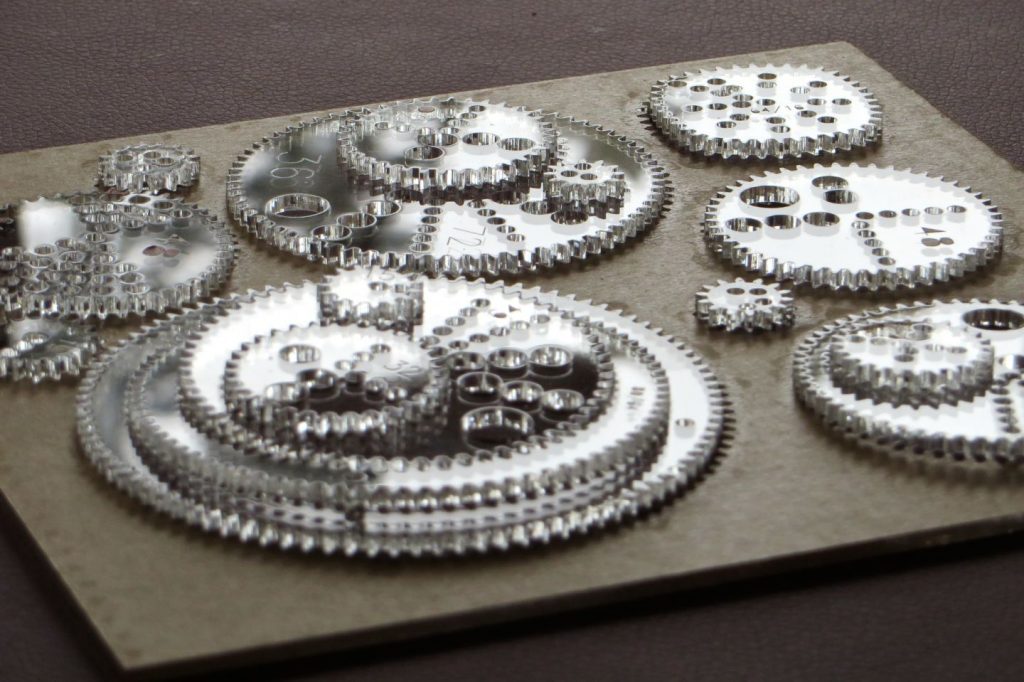 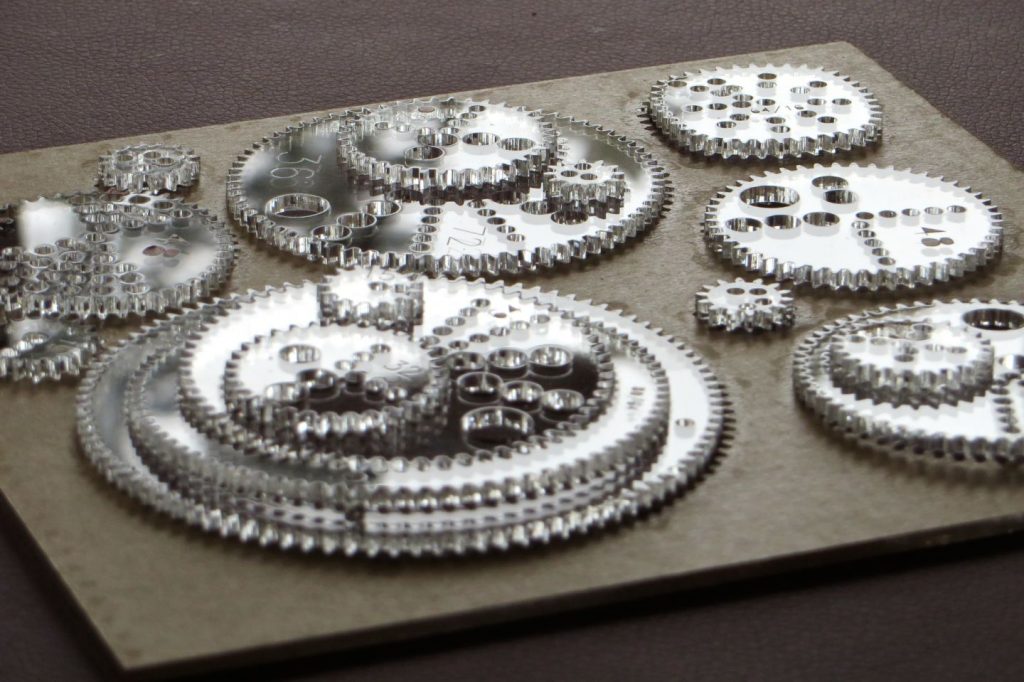 Could a free toy in a package of candy change the trajectory of your life? For Aaron Bleackley, it did.

It all started one day in early 2013 when one of his coworkers got a tiny geometric drawing toy when purchasing some candy. They passed it around the office and played with it. Never having a Spirograph® set as a kid, Aaron was enthralled.

This kind of drawing toy works using simple gear interaction. Just place a gear in a larger ring and use a pen to rotate the gear around the inside of the ring. The result: A multitude of interesting geometric patterns can be created.

That night, he bought a Spirograph kit. Throughout the next several weeks, he purchased several more geared drawing toys and spent his evenings admiring the beautiful designs that he made with them.

Eventually he became frustrated, however. There was a lack of variety of design options. He wanted more pieces. The plastic from which the pieces were made was fragile and imprecise. And the gears often slipped and hopped out of the rings.

“I scoured the internet for a really good Spirograph but didn’t find anything to satisfy me,” Aaron says. “So I concluded that I would have to make my own.”

Once he made the decision to make something himself, he had to figure out manufacturing. He found Ponoko and decided upon laser cutting because of the supreme precision it offers. “This is critical because you want crisp gear teeth that work smoothly with minimal slip or play,” Aaron explains. “This means that the design will come back to where it started, precisely and repeatedly.” In addition to functional benefits, Aaron was also interested in laser cutting because he could prototype a wide selection of designs, test them and make changes through numerous iterations without having to order large quantities—keeping his budget in check. Manufacturing on demand would also allow him to have products made at the time customers place an order. Thus, he could offer a variety of designs without needing inventory.

Aaron decided on clear acrylic as the substrate so the artist can see exactly how the design is proceeding. He didn’t want opaque or colorful gears that would hide part of the design during drawing.

Next, Aaron delved into the underlying math to create the geared drawing set of his dreams. To create the pieces each set would require, he began learning how to use vector graphic design software. It took about a week to finish the first prototype design, which would later become the Compact Gear Set, and he sent it off for production.

“When it arrived, I was ecstatic!” he says. “So much of what I had worked to achieve had gone exactly as I’d hoped. My gear set was wonderful to play with, but I immediately saw ways that I wanted to improve it.”

In addition to some structural upgrades, Aaron also wanted a much bigger set of gears. At this point, he recognized this project could get expensive rather quickly because he was actually doing iterative prototyping on a whole product line.

“With this realization, I started investigating Kickstarter so that I could share my joy of math and shapes with other people,” he says. “If I was really lucky, I figured that I’d cover some or all of my prototype costs.”

Aaron says the Kickstarter campaign was challenging to put together. He had to learn how to make promotional videos, take great product photos, write interesting descriptions of fairly technical things and plan for international logistics.

While learning how to market the project properly to attract backers, he was also continuing to build gears that could do more and more. In addition to traditional circular gears in various sizes, he created triangle-, square- and hexagon-shaped pieces to increase the designs that can be drawn. He also used new design technology that allows for the creation of shapes that would otherwise be impossible to generate using conventional gear and pen methods. By adjusting the configuration of the pen holes, the artist could not only make the traditional designs that cross each other at acute angles but also figures with parallel patterns—which was totally new.

“The ability to generate both types of designs widens the range of possible art with stunning effect,” Aaron says. “I have not encountered another gear set with this unique design feature.”

Because his gear set offered far more than what was available at retail with traditional Spirograph sets, his backers responded. The funding goal was set at $1,200, which he blasted past with $3,889 raised.

“It went better than I dared hope,” Aaron admits. “Because it funded at more than 200% of its goal, this allowed me to test and develop a wider selection of Wild Gears designs. The campaign concluded on time and on budget, with products being sent to backers in nine countries on four continents.”

During the next two years, Aaron maintained a small web presence at wildgears.com and sold Wild Gears to anyone dedicated and determined enough to find them. “But by that time, I’d found enough things about the gear sets that I wanted to improve, correct or add that it was time to make a full revision,” he says.

In the fall of 2015, Aaron went back to Kickstarter for Wild Gears 2.0 to fund a redesign and expansion of his Spirograph-inspired gear sets. In this campaign, he was able to increase the strength of the gears, improve the parallel lines functionality, complete a general design overhaul and drop the price.

“The redesigned gear sets were priced to be 20% less expensive,” he says. “These savings came from a combination of techniques that I learned to reduce laser cutting costs as well as lower base fabrication costs.”

“My previous Kickstarter experience helped me make a much better campaign the second time through with clearer communication and better visuals,” he says. “It was a smashing success, funding at 544% of the goal, once again allowing me to make some stretch design goals.”

Continuing Wild Gears Into The Future

After two successful Kickstarter campaigns, Wild Gears has developed into a robust product line with multiple sets of drawing tools. The Compact Gear Set and Full Page Gear Set (shown above) are the foundational sets. While they are designed to stand on their own merits and provide a full and fun experience, they can be combined with additional gear sets to more deeply explore specific themes.

The Plentiful Gear Set is the next set of gears that would have gone into the Full Page gear set if there was more space.

The Enormous Gear Set adds gears and rings of up to 15” diameter for really huge designs. Ones larger than 36” are possible.

The Modular Gear Set is made of puzzle pieces that snap together to make curly twisty weird shapes for the gears to be used with.

The Hoops Gear Set is a series of nested rings on a small sized sheet designed to give as many large rings in as small a space as possible.

All of the Wild Gear sets are available for purchase from the wild gears website here.

Throughout the course of testing the new Full Page and Compact Gear Sets, Aaron found several new ways of using the gears to make designs. He published this photo tutorial so artists could add these options to their repertoire.

Aaron has also launched a YouTube channel to help artists reach the full potential of their Wild Gears sets. Currently there are 20 tutorials on how to create designs from the most basic shapes to more complicated patterns such as this parallel lines piece.

What makes Wild Gears so appealing is the simplicity of the design and how easy it is for people of all ages to use them to create beautiful pieces of art. Children can use them to create basic shapes while adults can dive deeper into their creativity and draw more complicated and integrated pieces. “Wild Gears provide boundless creative opportunity that appeals to everyone from children to retired mathematics professors and all the spaces in between,” Aaron says. “There is a beauty and peace to using these gears and watching the shapes they make unfold beneath your hands.”

I have a 60W laser engraver/cutter and have been unsuccessful in finding a gear generation program that is compatible with Corel Draw.

Hi George, We aren’t sure about Corel, but there is a free software called Inkscape that has a gear generator you can use. Hope that helps. 🙂

A great little article! Thanks for sharing.

I learned about Wild Gears from a visitor to my spirograph website. The first Kickstarter was finished and I ordered some sets. I’ve had so much fun with it, and continue to discover new things. I have been writing about Wild Gears and making videos too, some instructional and some just fun to watch. People can find all that on the Wild Gears section of my website here: http://spirographicart.com/wild-gears-spirograph-grownups/

Hi Heather, great to hear you’ve been having fun with Wild Gears. Thanks for sharing!

for gears, you could try this:
http://cuttingedgedata.com/GearCreate/GearCreate.html

As far as SVG goes, these gears are just a simple path. Corel should allow import of these plain SVG files

Hi Steve, thanks so much for the link. It looks very helpful!