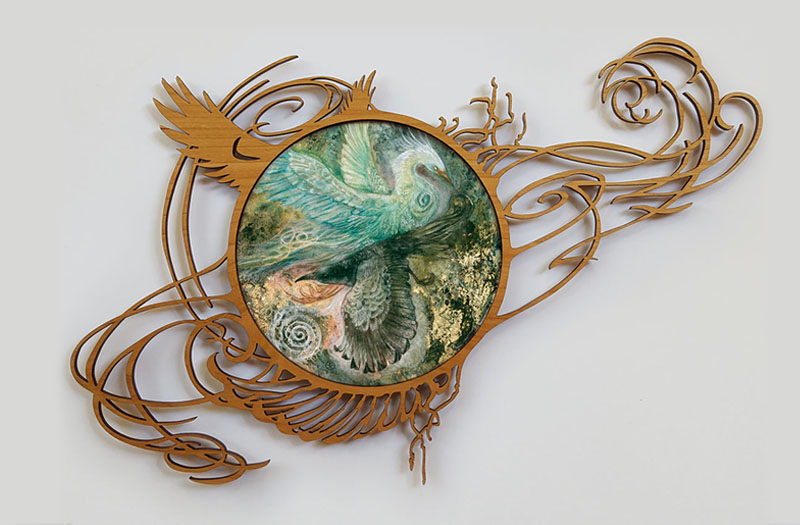 When you see a piece of art by Stephanie Law, you know it’s exclusively hers. In a meld of organic patterns and familiar archetypes, her paintings pose a question on the nature of perception and beauty. It’s against this backdrop that the ephemeral guides and strange creatures dance and beckon the viewer to follow through her various series.

She draws viewers in by interweaving texture, watercolor, gold and silver leaf, and ink. If that weren’t enough, she then intricately layers pieces with resin and adds her signature flair with custom laser cut frames.

The result is not only a beautiful and unique piece of art but also a firmly established brand unlike any other.

Carving Out Her Niche

Like any other field, the business of art is highly competitive. Not only must artists connect with patrons on an aesthetic and emotional level, but they also must separate themselves from all the other competitors in order to get buyers’ attention and sell their pieces.

“Creating differentiation is especially important in this time of a global marketplace,” Stephanie says. “Too often I go to art events and find that several artists are using the exact same frames for their work because they purchased those frames from the same websites.”

In an artistic world dominated by the rectangle frame, Stephanie knew she had to do something completely different to break out of the proverbial box. For a recent gallery show, she had an idea to extend the paintings beyond their frames.

“Initially I thought about 3D printing these frames, as I have played around with 3D printing in the past and it made sense when I began entertaining the idea,” she explains. “But I discarded the 3D printing idea because I didn’t like that plastics were really my only option for the kind of thing I wanted to create. It felt like a lot of expenditure to create something that in the end would cheapen the art simply because of the material limitations. Also, I was concerned that 3D printed plastics would be too fragile for the delicacy that I wanted to achieve.”

This realization sent Stephanie on a quest to find the right manufacturing technique for the artistic impression she wanted to create. Enter laser cutting. “A fellow artist recommended I try laser cutting with Ponoko,” she says. “After a test piece, I decided it was definitely the path I wanted to take for the art installations that I had in mind.”

Laser Cutting Her Way To Success

Stephanie’s paintings are beautiful on their own, but using custom laser cut frames adds another dimension to her work.

She begins each project with a painting, primarily working with watercolors, then incorporating gold/silver leaf and ink for one-of-a-kind mixed media creations. Many of the pieces have unusual shapes with elements that are cropped by the boundaries of the piece.

“I love to paint using unconventional shapes for the border of my art,” Stephanie says. “This is always something that is tricky with watercolors though, because watercolors need some kind of protection for the surface, which usually means matting and framing. By being able to custom design and create my own frames, I can make my art stand out.”

Take the Phoenix, from the “Where The Sea Meets The Sky” series, for example. Not only is the painted surface round but the wings also extend from the painting all the way into the frame—and there’s not a boxy right angle in sight.

After assembling the frame with the painting, Stephanie seals the painting area with poured clear resin to finish it off.

Because of the style of Stephanie’s art, wood is a natural fit for the frames. “I choose the Premium Veneer MDF – Cherry for most of my projects so far,” she says. “My art has a very organic feel to it, so I liked being able to choose wood to complement that aspect. Additionally, I like how the cut edges of the wood contrast against the uncut top surface. It adds an extra dimension to the art by having those two tones.”

Stephanie was also attracted to wood because of its strength but admits that it took a few pieces before she got the feel for how delicate and thin she could push her designs. “I didn’t want things to go too far in that direction and be easily breakable,” she says. “But on the other hand, it was an illusion of great delicacy that I wanted to achieve with these pieces.”

With the precision of laser cutting, Stephanie knows that she’ll have consistency when ordering multiples of any one frame—and important consideration because of how the paintings must align with certain elements of the frame. And no minimum quantity is required.

“I’m not mass producing my pieces, and since each one is a custom one-of-a-kind piece of art, I need to be able to order just a few at a time,” she says. “I don’t want to be tearing my hair out over how accomplish this, so the ease of quoting with Ponoko is very important for me to minimize overhead.”

What makes Stephanie’s work particularly interesting is the sense of movement that’s found not only in the paintings but also the frames. There’s a grace about the shapes, and so it’s no surprise to learn that Stephanie has been a dancer for almost two decades.

“I use the experience of how the human body moves and emotes to create a bridge into my artwork so that not only do the humans dance across the page but the branches of the trees also move with a sinuous grace, and the arrangement of inanimate elements has a choreographed rhythm and flow,” she says.

In Moment Of Suspension (above), you can see how the twisting boughs of live oaks from the hills near Stephanie’s home have inserted themselves into the paintings. “Growing up in California, I’ve been surrounded by the wealth of natural inspiration all around me,” she says. “The chaos of nature’s wild growth, and conversely the beauty of decay, echo in the textures and fractal patterns of my work.”

This distinctive view of nature showcased in her paintings combined with the equally artistic frames has helped Stephanie get noticed by galleries. Since 2013, she’s been a part of 30+ group exhibitions and has had seven solo exhibitions, with the latest coming up in December 2019 at the Modern Eden Gallery in San Francisco.

“After hanging an installation, one gallery reported to me that their visitors were amazed to see the result,” she says. “It was unique and eye catching, and it drew people through the doors.”

While the custom laser cut frames may have began simply as a way to further express Stephanie’s creativity and artistry, the result is a recognizable brand and competitive differentiation in her market. By properly framing her image, Stephanie has built an unmistakable brand that will literally make people stop on the street to take a closer look. It’s this kind of allure that branding is all about.

Hi Dianne, we think so too! We are very lucky to work with such awesome creative makers. 🙂