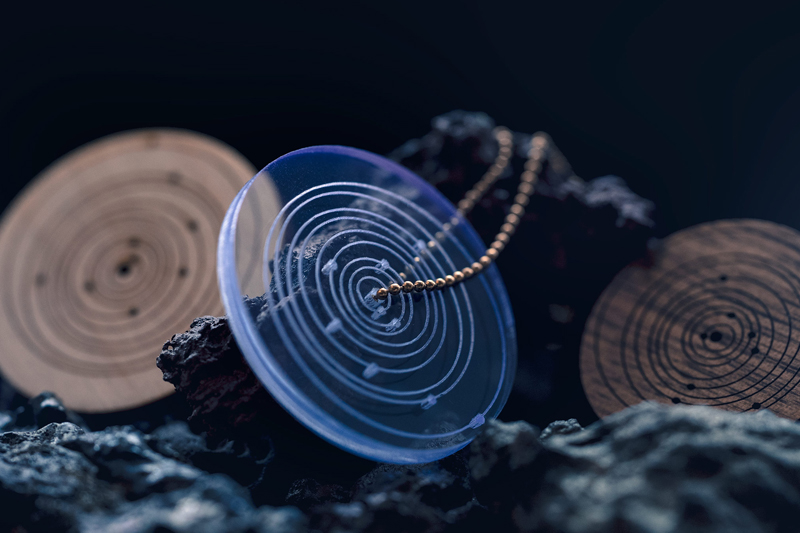 Have you ever wondered what our solar system looked like the day you were born? Or graduated from high school or college? What about the day you got married or the birth of your first child?

Time travel back to 2014, and these were the questions Govy, a Tokyo-based award-winning French artist, had on her mind.

“I got very interested in the depiction of time in space, specifically the idea of seeing an exact date within the solar system,” says Govy, who happens to be on the autism spectrum. “I spent weeks researching the solar system in order to make the most accurate model possible. When I get obsessed with a particular subject, I just need to gather all the facts, data and images I possibly can.”

Excellence is also very important to Govy. But there are tradeoffs when trying to reach accuracy and perfection. “They slow me down as I can waste a lot of time researching,” she explains. “It’s the gift and curse of autism, that need to know and be sure I have all the data possible on the subject. It’s like a craving I have no other choice but fill.”

Turns out, she’s not the only one craving to understand the space-time continuum. Enter Martin Vézina, the man behind the jsOrrery.

This solar system model can be viewed from multiple viewpoints and manipulated to present the positional relationships among celestial bodies. The orrery shows the position of planets, spacecraft, comets, visible stars, etc. in 3D. It can be used to visualize interesting phenomenon such as apparent retrograde motions of the planets, librations of the moon or solar eclipses, as well as historical events such as the Apollo missions. (See it at Open.NASA.)

By teaming up with Martin and using the jsOrrery, Govy could rest assured that she was using the most accurate data, allowing her to optimize her creation process—and build a business. Ultimately, the duo co-founded SpaceTime Coordinates and their journey toward successful crowdfunding campaigns began.

Since there were no products depicting space and time on the market in 2014, Govy decided to create a series of items with representations of our solar system at any given date in time. She and her team use the NASA data in the orrery to perform some complicated calculations in order to generate the most precise and accurate depiction of our planets and their orbits.

“Every date in history has a different and unique planetary alignment,” Govy says. “This is not a simple gizmo, but a precise depiction of the solar system. Our designs are the most precise and accurate on the market because we rely on the same data that is used by NASA to predict eclipses or to compute spacecraft trajectories.”

Once she had the first products designed, it was time to launch. The initial Kickstarter campaign introduced the SpaceTime Coordinates (STC) concept, with the solar system designs being produced on either t-shirts or printed posters. More than 1,500 backers pledged €83,660 to bring the project to life—and it also won the 2016 Golden A’ Design Award (which honors the best designs, design concepts and design oriented products worldwide).

“I was very surprised by the initial success!” Govy exclaims. “And I’m glad to say I created the original product, as some have since made very similar products on Kickstarter.”

With the second STC Kickstarter campaign, Govy and Martin expanded the product line by 3D printing a more intimate version of the STC project: A coin-sized pendant that could be worn as jewelry, attached to a key ring or carried in a pocket or purse and used as a token for magic tricks.

Once again, the duo rocketed past the initial funding goal, with 582 backers pledging $54,020—and winning the 2016 Bronze A’ Design Award.

While the campaign was wildly successful, Govy wasn’t 100% in love with how the 3D printed products turned out. “I wanted to make very precise pieces, and given how small they are, the results in 3D printed plastic were not satisfying,” she explains. “I wanted to make them in wood and acrylic as well.” Time to find another means of manufacturing.

For their 2018 Kickstarter campaign, Govy and Martin expanded into laser cutting the coin-sized pendants they had previously created via 3D printing. The campaign rocketed past the $1,900 funding goal by 4,285%, raising $81,418.

“I was excited to try this project in wood, as I was sure it would look great,” she says. “I was curious about acrylic as well, even though at first I thought the material might be a too thick. It actually works very well with the product as it plays with the transparency and it gives a spatial depth that is very interesting.” 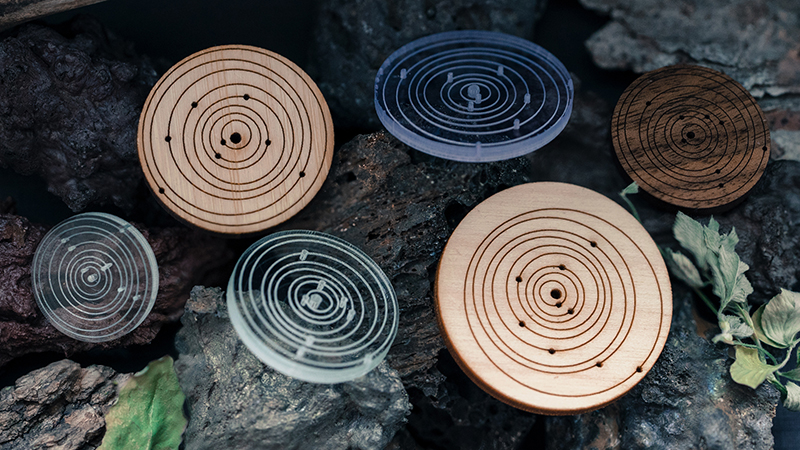 The sun and our eight planets are represented by small holes. (There is an option to add a ninth orbit and planet for all the Pluto lovers out there.) And the orbital paths are illustrated by concentric etched lines with their sizes and distances schematized.

There are two options for the wood mementos. First is the walnut premium veneer. It has an MDF core with real wood veneer (thin slice of wood) on each side, which is sanded smooth and finished with a clear coat. It has a high-grade appearance, and the grain will change the overall appearance depending on the light direction. 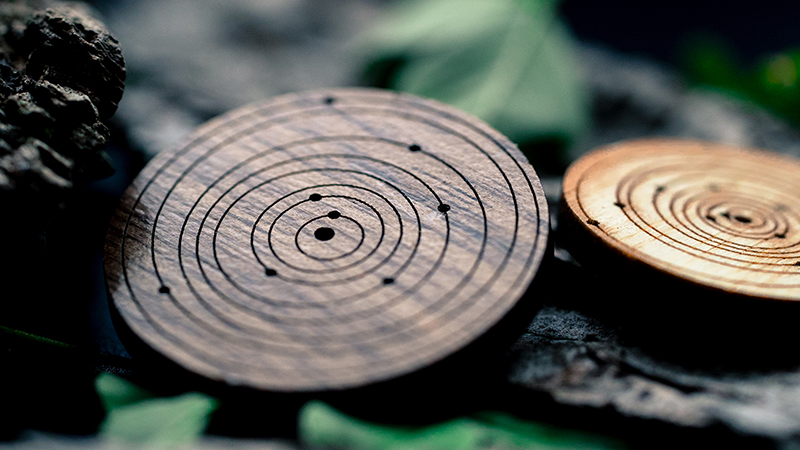 Second is bamboo, a material with natural variation in wood grain that is comprised of five layers of veneer. Since Bamboo is 100% renewable and sustainable, it’s a appealing to those with environmental interests.

While the wood has a natural, classic aesthetic, the acrylic has a contemporary vibe. This fluoro blue appears to almost glow when the light hits it just right. 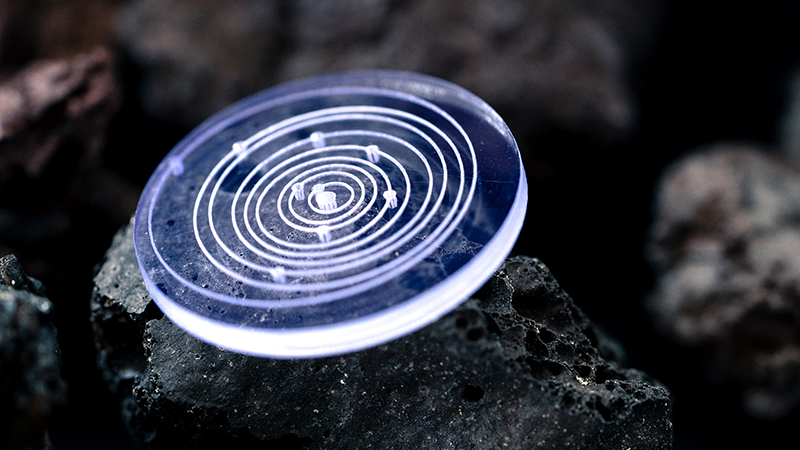 The green glass acrylic is equally as stunning, as you can see how the laser engraving plays off the depth of the plastic. 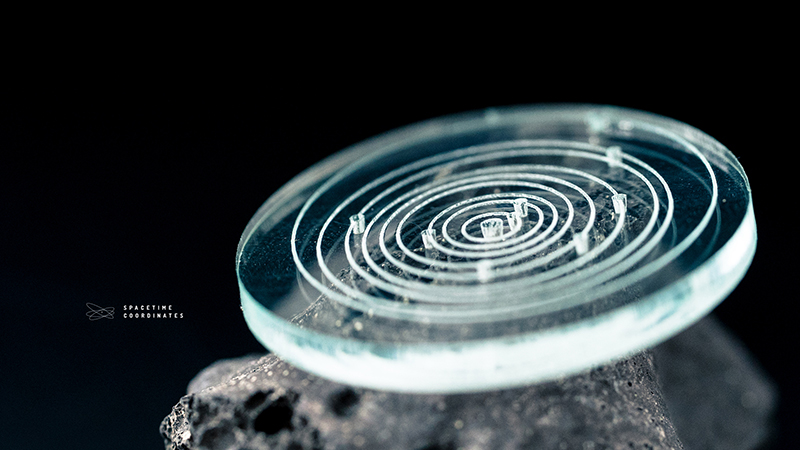 In physics, spacetime is any mathematical model that fuses the three dimensions of space and the one dimension of time into a single four-dimensional continuum.

In these SpaceTime Mementos, the four dimensions (x, y, z, and t) are used to represent a particular location in time and space, a.k.a. the fourth dimension, which just might come in handy if you ever stumble upon a wormhole or a tear in the fabric of the universe. You’ll always be able to find your way home—but only if you’re wearing it! 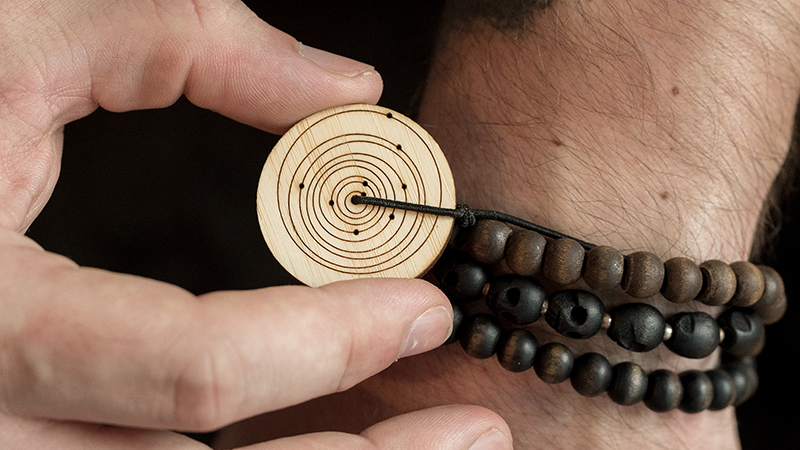 Govy says she knew about Ponoko pretty much from the beginning and made her very first laser cutter project, templates for a ceramics project, in 2011. (Incidentally, this Yozakura Sake Set became her first Kickstarter campaign and was honored with the 2015 Iron A’ Design Award.)

As she continued designing laser cutter projects, she worked with a variety of laser cutting manufacturers to weigh all the options. “But Ponoko has the best quality and the customer support is amazing,” she says. “All other companies had no time for my questions, could not do small jobs or could not offer the same quality.”

But things weren’t always perfect. “The first samples had sort of wavy lines, but my design being so small, I can understand it was difficult to make,” Govy says. “I shared this with Ponoko and after they recalibrated their machines, the final designs were stunning!” 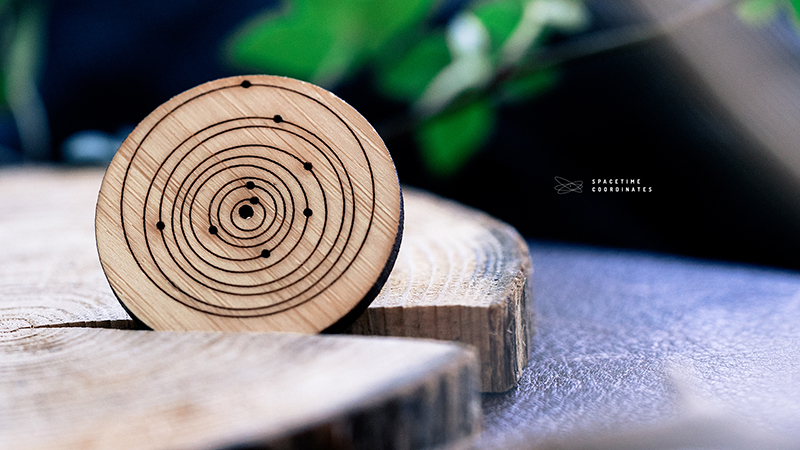 What makes the STC mementos so appealing is that you can take the vastness of space and customize a piece with a blip in time that is meaningful to you—from birthdays and graduations to first kisses and wedding dates.

You can also choose to commemorate fundamental events in our history. Check these out:

Whatever date you decide to celebrate with the mementos, the goal is to put things into perspective. “Take a moment to appreciate the human condition, nature, space and life,” Govy says. “Take a breath. Contemplate.” 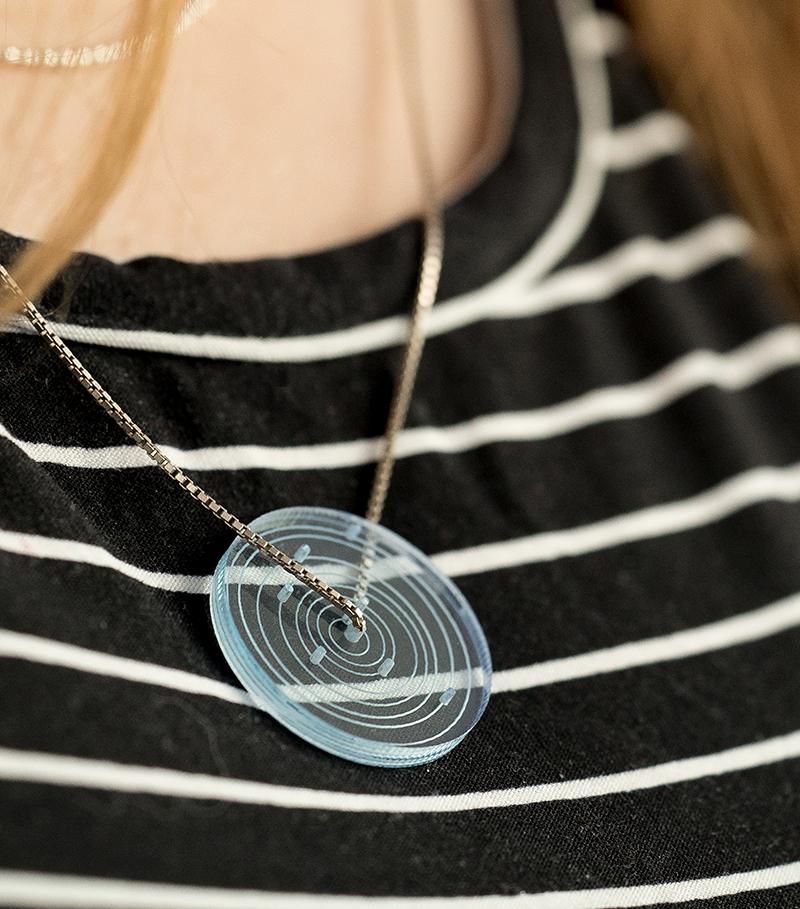 “This design project helps us relate to the solar system itself and find our place in the universe,” she continues. “We might all just be space dust in the big picture, but this project gives us a chance to grasp our own individual humanity and ephemeral time on earth. We all are part of the universe, so let’s make it count!”