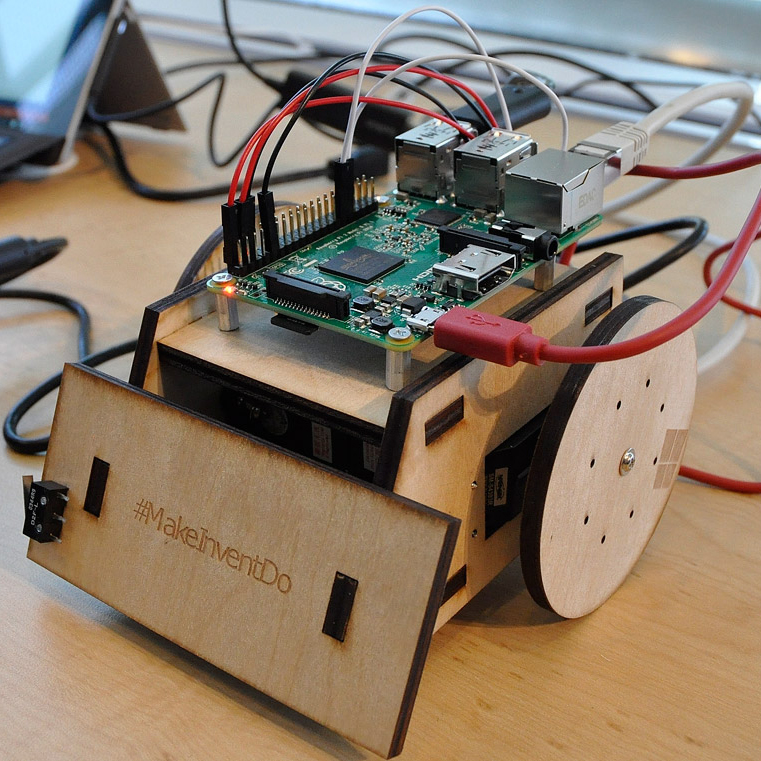 So the company went to the drawing board (literally!) to create the ultimate tradeshow giveaway for its Build Developer Conference—and you’ll never guess what they made.

Build2015 was all about going loud with Windows 10 IoT core, and Microsoft needed conference swag that showcased its platform during the launch event.

“We wanted a giveaway that would entice the community to go and try Windows10 on Raspbery Pi,” says Dan Rosenstein, a principal program manager at Microsoft. “I knew what the platform was supposed to be long term because I had been architecting and working on it for almost a year and a half. I knew what the capabilities were at about six weeks out, and I knew what the capabilities would be at the time of the conference. To put this in context, we were building platform—an operating system—a product that was all liquid leading up to the conference. This is important because I had to identify how we were going to showcase what this product is supposed to be to let customers dream and understand the value propositions of the product.”

So what kind of giveaway would be substantial enough to accomplish all of Rosenstein’s objectives? He had a great idea, if it would work…

In 2014, Rosenstein attended RobotsConf, a small conference about Node.js being able to power robots. While there, he saw a small wooden sumo robot used for a giveaway—and that planted the seed in his head for what happened next.

The Build For ‘Build’

Rosenstein credits Pawel Szymczykowski, the designer of the original sumo robot, as the foundation on which the Microsoft robot plans were built. “I started working with him, making sure it was ok to use his conceptual design,” Rosenstein notes. “Obviously the design that we ultimately used for the mechanicals was not the same as what he had, but our robot was definitely designed and inspired based on the open source plans that he had created.” He combined Szymczykowski’s concept with his experience with First Robotics as well as his experience at RobotsConf when coming up with the final plan. “Knowing what the platform was, knowing what resonates with people and knowing our developer audience, I believed we needed to build a little robot,” Rosenstein says, “and we needed to do a giveaway of this robot at the Conference.”

But it wouldn’t be easy. He had never created event swag like this nor designed a custom giveaway on this grand a scale. In fact, many of his peers didn’t think it was possible to pull off the project in the timeframe available. There were so many moving parts, the platform was liquid, the timeframes were light and he was running up against budgetary constraints.

Undeterred, he set out make it happen.

“I had to design electrical, mechanical and software for this little thing plus get it approved by all the stakeholders (and when you’re talking about Microsoft’s Build Conference, there are a lot of stakeholders!),” Rosenstein explains. “Next, I had to prove the technology on the liquid platform, rally the whole organization to get it built and complete the testing needed to make it work. Then I collected the data to be launched at ‘Build,’ created the plans and videos to actually go big with it, produced the marketing materials, and found suppliers (including Ponoko) that could help me visualize it and also be able to put the kits together.”

But the outcome was totally worth all the extra effort. Check out the Sumo Robot in action:

During the event, Microsoft used the Sumo Robot in numerous ways:

1. A special area was created for event attendees to look at the code, see how the code worked and try it out with the robot.

2. More than 500 robot kits were used as a giveaway that included all the software and hardware, instructions, electrical components and tools for attendees to be able to build it at home.

3. Microsoft’s Steve Teixeira included a demo of the robot as well as an online showcase of the project in his presentation.

Rosenstein is still surprised at how the project came together. “I don’t know how you did it, but you absolutely made it in the timeframe we had. We (Microsoft) started the discussion six weeks out—and it wasn’t approved until four weeks before the event. To pull off something like this in four weeks was frankly a miracle. It was only because I got lucky on a couple of suppliers, and one of them was Ponoko.”