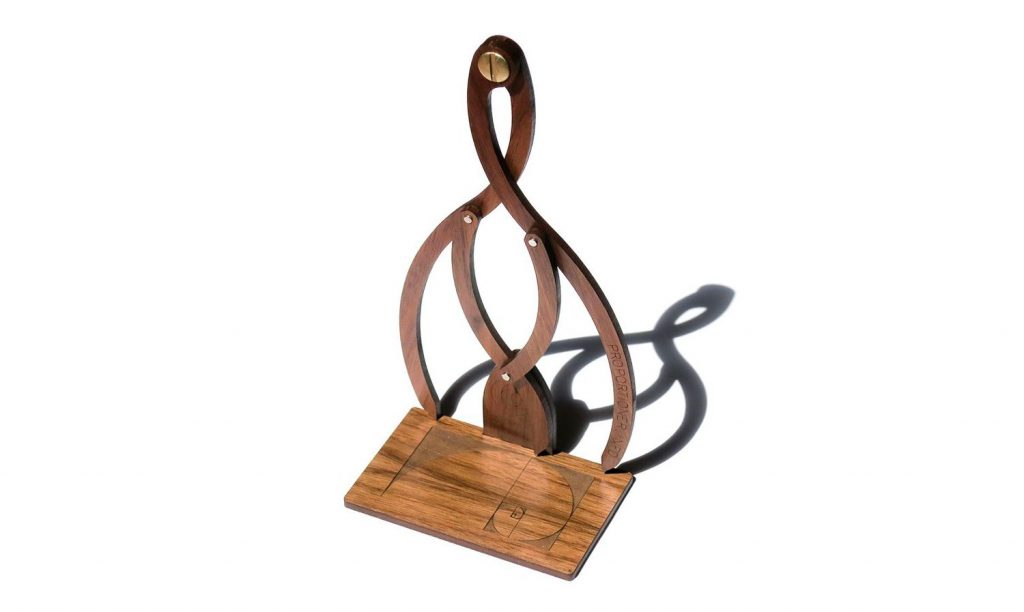 The Secret Behind The Elegant Instrument That Measures The Golden Ratio From great works of art down to the credit card in your wallet, the golden ratio is everywhere. In mathematical terms, the ratio is 1:1.618. While these numbers may not hold much meaning to the casual observer, they have been studied by scholars for centuries.

“Some of the greatest mathematical minds of all ages, from Pythagoras and Euclid in ancient Greece, through the medieval Italian mathematician Leonardo of Pisa and the Renaissance astronomer Johannes Kepler, to present-day scientific figures such as Oxford physicist Roger Penrose, have spent endless hours over this simple ratio and its properties,” says Israeli astrophysicist Mario Livio. “But the fascination with the Golden Ratio is not confined just to mathematicians. Biologists, artists, musicians, historians, architects, psychologists and even mystics have pondered and debated the basis of its ubiquity and appeal. In fact, it is probably fair to say that the Golden Ratio has inspired thinkers of all disciplines like no other number in the history of mathematics.”

Scott has followed the work of these thinkers in his use of the golden ratio. A graduate of University of California at Berkeley with a degree in architecture, he has written and self-published seven books about the Secrets In Plain Sight, a series that documents his ongoing research, unique discoveries and sacred geometry artwork. He has also produced a Secrets in Plain Sight film series profiling patterns found in art, architecture and the cosmos—which has now been viewed by millions.

Due to its precise geometric design, the Proportioner’s middle pointer always proportionally indicates the golden ratio with respect to the width of the outer arms (aka, the whole). Like many makers, Scott wanted to test the demand for his product before going into full production. So he started a Kickstarter campaign to bring the Proportioner to life.

While the Proportioner may seem like a simple tool, making this elegant instrument was far from easy.

Scott initially considered 3D printing, CNC or water-jet cutting to make his golden ratio calipers with a unique magnetic hinge, but none of these manufacturing options were as well suited as laser cutting for what he wanted to make.

“High quality laser cutting turns out dimensionally accurate parts every time,” Scott says. “My device has interference-t magnets where the tolerance is a few hundredths of an inch. The magnets must fit perfectly every time. There is no way to replicate this by hand or by using woodworking machines. Because of these extremely precise small-scale details, laser cutting was the obvious choice.”

And while he did try other laser cutting services before finding Ponoko, he made the switch because of the easy-to-use web interface and choice of materials. “None of the other laser cutting services had the right material for what I wanted to make,” Scott says. “I like the feel of wood rather than metal or acrylic in the hand, and Ponoko has the 3.5mm thick premium veneered MDF that suited my project perfectly.”

Scott determined that using the premium walnut veneer surrounding a medium density fiberboard core on top and bottom was the best option for his calipers. “This materials ‘sandwich’ is far stronger and dimensionally stable compared to Baltic birch and other plywoods,” he explains. “The hard veneer layers help the Proportioner arms slide smoothly and they are quite attractive. The MDF core doesn’t warp, bend or twist like plywood does, an important consideration for the long slender arms in my device.”

Once he had made the materials decision, the next challenge for Scott was figuring out how to pack the maximum number of parts needed on the given sheet size to keep his costs in check. “The arms of the Proportioner are complex curves and optimally tiling them is non-trivial,” he says. “Having no automated way to do this, I did a lot of trial and error in AutoCAD until I ultimately was able to fit 25 Proportioners per sheet.”

In addition to creating the calipers, Scott designed a magnetic stand to hold them. The stand is assembled without tools, simply by pressing the finger joint together at a right angle. Micro bevels laser-cut into the finger joint ensure a snug fit. What’s cool about the stand is that it not only provides a convenient place to store the Proportioner, but it also converts the instrument into an attractive small sculpture when not in use.

Discovering The Golden Ratio In Your World

Open any art history book, and you’ll see that many old masters structured their compositions using the golden ratio, although this fact continues to largely go unrecognized.

See how Leonardo da Vinci used the golden ratio to create Bacchus (formerly Saint John The Baptist), while Michelangelo located the divine spark in The Creation Of Adam using the divine proportion. But the golden ratio isn’t limited to works of art; it can also be found in the more mundane. Just look at the structure of the ebony and ivory keys on the piano, or the configuration of vinyl records. Who knew making music had such beautiful mathematical proportions. Scott says the golden ratio is the most succinct mathematical expression of the Hermetic concept, “As above, so below.” And he hopes that Proportioner users will feel empowered to discover the golden ratio for themselves in the natural world and in human-made objects.

Robert Lawlor, author of Sacred Geometry: Philosophy & Practice, said: “The golden ratio is a reminder of the relatedness of the created world to the perfection of its source and of its potential future evolution.” With the Proportioner, that creation just got easier.