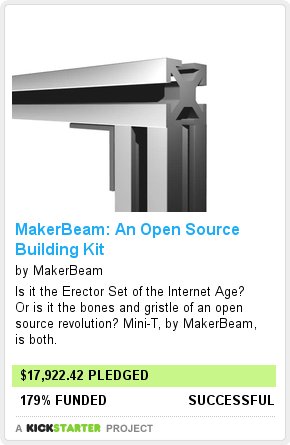 Gets Kickstarted with 179% Funding…. MakerBeam is a toy and tool for the open source imagination. Build a fire-breathing robot dinosaur, a miniature CNC machine, a remote control car, whatever your overclocked brain can produce! Or build a castle, or that perfect enclosure to hold the circuitry for your custom electronics project.

Mini-T is a miniature version of larger T-slot building systems. It consists of extruded aluminum beams, 10 mm on a side, and various connectors and panels that slot into the sides of the beam, making up the full MakerBeam system.

As interesting as the product is in itself, even more exciting is the thinking behind releasing the system as an open source building kit…

MakerBeam is an open source project, and the first open source construction set we’re aware of. MakerBeam part models and standards will be released under Creative Commons licenses, allowing makers and tinkerers to modify and build off our platform. When boxes ship, MakerBeam will be atoms, not bits, and atoms are protected by patent rather than copyright. Makerbeam believe the Mini-T standard could have been patented, but are giving it into the public domain, because they have a larger vision for it.

The team behind MakerBeam believe in open source licensing, and the power and potential of the open source hardware movement. They also believe in the Constitutional impetus behind intellectual property law, namely, “To promote the progress of science and useful arts”. Balancing this is a complex and ongoing affair.

This choice was made carefully, cognizant of the reality of intellectual property and industrial production in the world today. Patents, not copyright, control production of parts and goods; even with a patent on our connector system, it is likely that significant success would result in our kits being cloned by manufacturers in other countries where patent lawsuits are pointless.

Also, desktop manufacturing of connector parts is not quite ready for prime time. The tolerances needed simply do not support rapid fabrication as an option at this time. This will change soon, however, and when it does, it hardly matters what license we choose for our 3-d models. If people want them, they will print them.

Read more here and although they are now funded through Kickstarter, I am sure that Sam Putman, Glenn Powers and James Coddington could always do with some additional love..