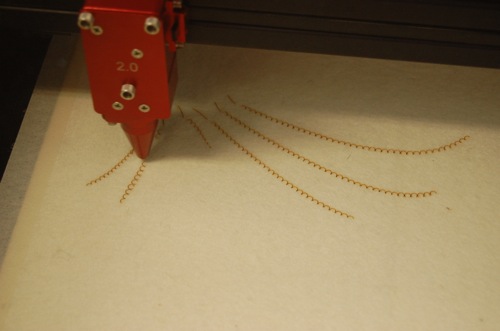 via Chris Reilly of Rainbowlazer Felt is an extremely versatile material. It’s non-woven, which means it has no warp, no weft, and no bias; it doesn’t unravel, which makes it an ideal material for intricate garments. However, because it is thick and relatively unforgiving, cutting intricate patterns and structures into felt is difficult to do by hand. Precise cutting is usually done by means of an industrial die cutter, which is costly when producing things in small quantities. Because of the cost of die cutting, using a laser to cut felt is great for prototyping and experimentation. The only downside to this method is the burnt smell.

But do not be too concerned of becoming a ‘mad hatter’ The United States Public Health Service banned the use of mercury in the felt industry in December 1941.

Felt is the oldest form of fabric known to humankind. It predates weaving and knitting, although there is archaeological evidence from the British Museum that the first known thread was made by winding vegetable fibers on the thigh. In Turkey, the remains of felt have been found dating back at least to 6,500 BC. Highly sophisticated felted artifacts were found preserved in permafrost in a tomb in Siberia and dated to 600 AD.

Use 95-100% Wool Felt. This is a good idea for the laser cutter in order to avoid the release of toxins into the air, but it’s also a good idea in general, as the material quality of 100% wool felt makes a huge difference in any project.
There are two types of high-grade wool felt you can buy. Industrial/SAE felt is fabricated to standards set by the Society of Automotive Engineers and comes in cream (new wool) and grey (a mottled recycling of old wool and other materials). There is also 100% wool felt that is usually sold for doll making which comes in a multitude of colors. Stick with the plant-based dyes. Don’t get the craft-store felt — that’s mostly acrylic and is just really low quality in general.

They’re using a Universal X-660 60W laser cutter with a compressed-air assist. Here are the settings he used for cutting 1/8″ F10 wool felt:

Keep an eye on the Rainbowlazer site as it has some interesting tips on laser cutting, 3D printing and 3D scanning.

Rainbowlazer is an online repository of scripts, tutorials, and information from art/tech projects by Chris Reilly. Chris works and teaches for the School of the Art Institute of Chicago, at the Advanced Output Center, and the Design department where he runs the laser cutter, rapid prototyper, and large-format printers and scanners.