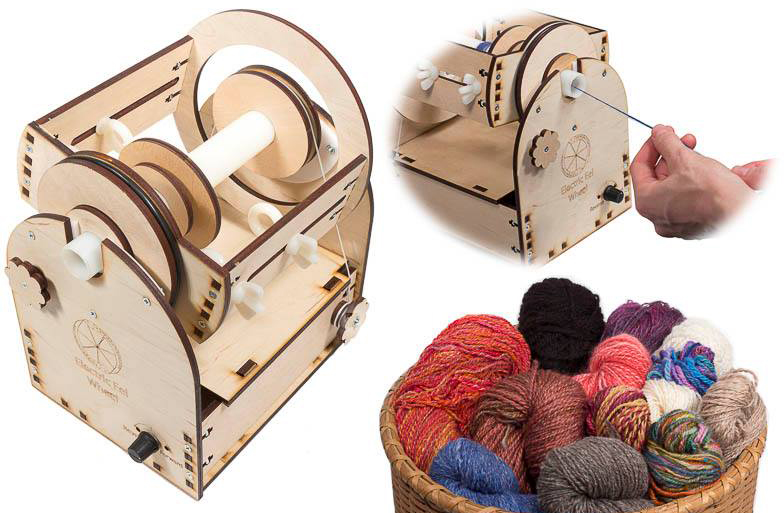 But luckily, Maurice Ribble’s story isn’t so grim (pun intended.) Maurice is a computer engineer who lives with his wife Emily in the Boston area. “I always say my wife’s first love is knitting because she’s done it for much longer than she’s known me,” he says.

Emily often spins her own yarn for her knitting projects and totes a manual spinning wheel to her knitting group. “The mechanics of the spinning wheel were fascinating to my engineering mind and her need to travel with it gave me some great reasons to set about making a very portable, electric spinning wheel,” Maurice explains.

Soon he had requests from Emily’s friends to make them one too. “One thing lead to another, and now you can buy them on the internet,” he says. And lots of people are buying them.

“The Electric Eel Wheel has been a huge hit in the hobby fiber, spinning, and knitting communities,” says Maurice. According to the Craft and Hobby Association, fiber crafts account for 25% of the $30 billion dollar craft market.

Maruice had enough demand for the Electric Eel Wheel to release a third version, this time using Ponoko’s laser cutting service to make the parts.

“Going from cutting the parts on a bandsaw to using laser cut parts from Ponoko has not only let me scale the business, but I’ve gotten tons of complements about how great and professional the new version looks,” he tells me.

The new version is laser cut from birch veneer, one of over 80 different materials available at Ponoko.

Making the wheel with the bandsaw was extremely time consuming, so his product was always sold out. “This new version with it’s laser cut parts removes that barrier, and I have the final assembly done by a local guy I found on craigslist. So far it’s been working great, and my inventory problems are gone,” he says happily.

Maurice sells the Electric Eel Wheel at his online store Dreaming Robots. A fully assembled wheel is $290, and self-assembly kits are available for $240. There’s a great build guide wiki with lots of detail and photos of each step.

For a demo of the Electric Eel Wheel in action, check out this video.

While this is the third commercially available version, Maurice had to prototype the wheel over 10 times to get it right. “While I am an engineer, I didn’t really have much design experience for this type of a project. It’s really just the result of a lot of trial and error,” he says of the development process. “But it was an effective way for me to learn,” he continues “and now that I’m familiar the various Ponoko fabrication options, nearly every month I’m sending away for something to be made.”

I ask Maurice if he has considered opening an Etsy store and selling his wheel along with other fiber supplies like wool roving. “I already had the Dreaming Robots store, so it was easy to sell it there first,” he says “but I’d strongly suggest to people trying to sell a few products to start with something like Etsy or Ebay because it’s so much easier to get started.”

Got a great hardware idea of your own? Make it with Ponoko.

Sounds fair, as spinning wheels are as old as time, now there’s a CNC cut one! 🙂

We have a yarn shop, and I think people who are interested in spinning their own yarn would purchase this little spinner. What are the chances of buying a few to “test the water”. Are they for sale? Wholesale prices?

Hi Donna, they are for sale. You can buy them here: http://www.dreamingrobots.com/store/index.php?main_page=index&cPath=2&zenid=s9mjgohps0l7aicc2k242897q2 You’ll have to get in touch with Maurice directly about wholesale pricing.