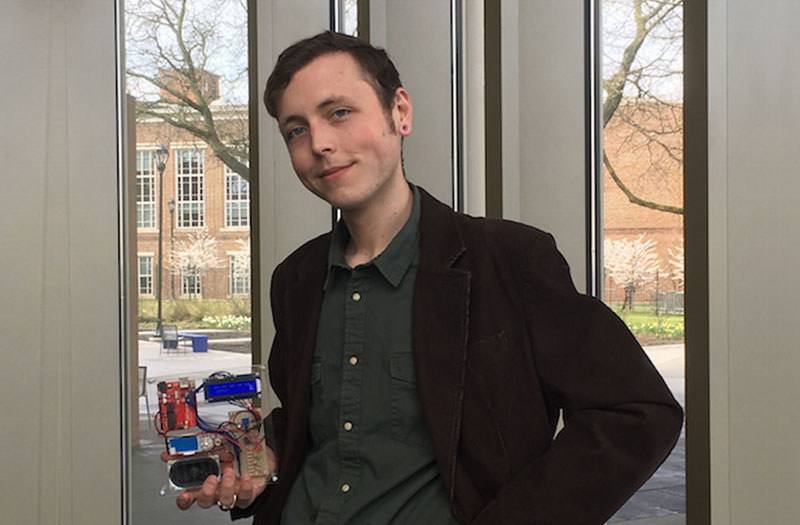 You’ve heard the old adage “necessity is the mother of invention.” Such is the tale of how Grant Bouvier began making synthesizer modules. An electronic artist and music technologist, Grant’s interest in synthesizers began when he started his undergraduate studies at the University of the Arts in Philadelphia.

“As I started to move away from soft synths and VST toward analog and hardware synths, I began to wonder how hard it could be to build my own,” he explains. “The majority of the most sought after synths and modules, both current and vintage, were basically out of my budget as a student, so I decide to start digging online about building some myself.”

Once he was introduced to laser cutting by a professor, he was hooked. “As I built up my knowledge base about electronics and product design (including laser cutting) over my sophomore and junior year, the idea of building some professional quality modules became more and more realistic. Finally, during my senior year I decided to design and build a prototype set of voltage controlled oscillators adhering to the eurorack modular standards. This eventually became my senior thesis, as I incorporated elements of both the east and west coast schools of synthesis to build VCOs that were uniquely fit to serve my needs as an artist.”

When Grant begins a design, he typically has a clear mental imagine of what he wants the front panel of a synthesizer to look like. “I have been using clear acrylic since I first began making synth modules,” he says. “It started out because laser cutting front panels was the fastest and most cost effective means to prototype, and clear acrylic was all I had at my disposal at my university’s photo lab. Also, acrylic has the added benefit of not being conductive, which is a useful property when building electronics. Since then, however, clear acrylic has become a part of the aesthetic of all my synth designs and turned into my brand.”

Using clear acrylic also visibility into the modules internal circuitry. “I think the literal element of transparency brings the user closer to the heart of the machine they are interacting with,” Grant says. “I like understanding my tools, and clear acrylic front panels allow you to get a glimpse into the inner workings of those tools, inviting you to learn more.”

When working on a build, Grant typically likes to use different geometric patterns that create a logical flow from section to section of a particular module. “Sometimes I get a bit more adventurous with the engraving, but other times I try to be more conservative and minimalistic. It depends on a lot of factors, from how much money I have to spend at the time to my general mood on any given day.”

In 2017, Grant teamed up with Clare Mason and Anirudh Mani to participate in the Red Bull Hack the Hits 2017 music technology hackathon. Over the course of 48 hours, the trio created the Machine Elf performance synthesizer: A gyroscopic analog synthesizer with digital control that was the recipient of both the Judges Choice Award and Teams Choice Award.

The analog engine consists of two square wave oscillators optically coupled (via homemade vactrols) to an Arduino 101. The Arduino provided the gyroscopic data from both axes, which is then used to control the pitch and modulation of the oscillators.

Whether you’re making just for fun, to enter a contest or you plan to use your designs within a business setting, Grant recommends keeping detailed process notes. “Making accurate records for every measurement and clearance space, along with any handy short cuts you may have found in your program of choice, is extremely useful,” he says. “Good notes and methodology, while time consuming initially, will eventually save you what could be hours in troubleshooting down the road. I also like to keep basic panel templates. Now that I have a back catalog of templates and a useful resource guide of my own, I can finish a laser cut design in an afternoon (if it is not too demanding).”

As Grant built synth modules though his undergrad and then into his graduate studies (he received his MFA in Sonic Arts from Brooklyn College in 2019), he realized the need more robust manufacturing capabilities to achieve the design aesthetic he wanted. “My university had an okay laser cutting set up, but as I started making more advance designs, I wanted something more professional,” he says. “I found Ponoko on a lucky Google search and have been a loyal customer since.”

One of the initial selling points was how easy it is to upload designs and get quotes. “Ponoko has been rock solid on literally everything I could ask for—tons of materials, careful shipping and killer support,” Grant says.

What keeps Grant coming back? The affordable price and high quality. “When it comes to prototyping modules, I want bang for buck, and I have yet to find a laser cutter that produces the quality of Ponoko for the price,” Grant says. “It’s the best laser cutting service I have ever used without question.”