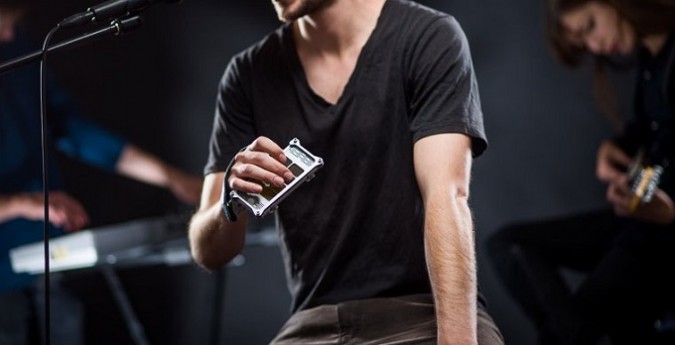 When the Auug team dreamed up their novel music interface the Motion Synth, they knew that there would be a great response from musicians and enthusiasts alike. Before Motion Synth, there was no integrated system that allowed for electronic musicians to interact with their instrument in a natural, intuitive way.

The innovation that makes all the difference with the Motion Synth is in the way that it combines a cleverly resolved physical interface with the robust and technologically powerful iOS mobile device range. Motion Synth consist of three elements, all working together: the AUUG Grip, the AUUG app and the AUUG cloud. The Grip is what we’re focusing on here. Laser cut from aluminium and then CNC cold-formed, it encases an iPhone or iPod touch in a way that leaves the fingers free to interact with physically defined regions on the screen. All this happens without interfering with the intuitive process of actually playing music; no distraction from whether the device is secure, or looking to see where to place the fingers.

You may think this sounds a bit like a 21st Century Theremin, but there is actually a whole lot more to the Motion Synth. A true laser cut success story, the Motion Synth is a showpiece for the integration of digital manufacturing technologies such as laser cutting with high-end electronic devices.

Auug’s Motion Synth is a fantastic example of how laser cutting gives product developers the ability to go from concept to fully functional prototype in a smooth, efficient workflow. Already highly resolved prior to the successful Kickstarter campaign, the commercial product has also received serious attention from investors on Shark Tank Australia. By working with the available technologies and making clever use of their combined strengths, AUUG founder Dr Joshua Young is breaking new ground with the Motion Synth.

We highly recommend checking out the product videos on auug.com to see just how amazing this combination of physical and electronic components can be, and you can also learn more about the product development and public funding process at the Motion Synth Kickstarter campaign.