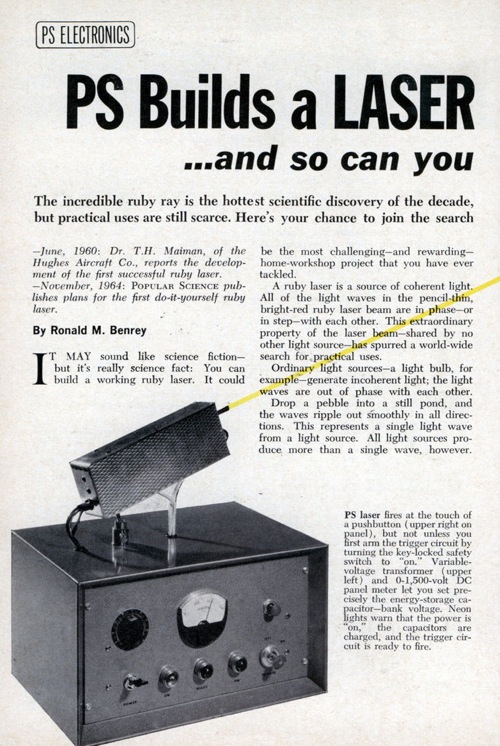 According to Popular Science magazine in November 1964 It may sound like science fiction but it’s really science fact: You can build a working ruby laser. It could be the most challenging and rewarding home-workshop project that you have ever tackled. A ruby laser is a source of coherent light. All of the light waves in the pencil-thin, bright-red ruby laser beam are in phase or in step with each other. This extraordinary property of the laser beam shared by no other light source has spurred a world-wide search for practical uses.
Ordinary light sources, a light bulb, for example, generate incoherent light; the light waves are out of phase with each other.
Drop a pebble into a still pond, and the waves ripple out smoothly in all directions. This represents a single light wave from a light source. All light sources produce more than a single wave, however.
They act as if you dropped a handful of pebbles at once: You get a jumbled clutter of waves one on top of another. This clutter of waves is analogous to incoherent light.
Suppose, though, you dropped your handful of pebbles one pebble at a time, each in exactly the same spot in the pond. The waves would continuously radiate from that point. All of the wave crests would be in phase. This is coherent radiation.

A ruby laser generates a coherent light beam by a similar process. Laser is an acronym for Light Amplification by Stimulated Emission of Radiation. Inside the heart of the ruby laser, excited atoms are stimulated to emit light waves in phase with each other.
A coherent beam can be focused to a needle-sharp spot with a simple lens system, concentrating the beam’s energy into a tiny area. Focused laser beams have seared holes in wooden blocks; burned holes in diamonds; performed delicate eye surgery by â€œweldingâ damaged retinas.
The PS laser won’t duplicate the feats of strength of large, powerful professional models but then, it costs only 1/50 as much. You can assemble the PS laser for a total cost of under $175.
What can it do? We’ve left that up to you. The PS laser is an open-end project: There is room for you to experiment, modify the basic design, and add your own ideas.

It is so great they describe it as an “open end project” and proves the lineage of Creative Commons, sites like Make and Instructables, the Hacker ethic and the DIY Punk Ethic before it all have their share-alike roots in magazines like Popular Science and Popular Mechanics

Big thanks to the Modern Mechanix blog…

I can already imagine the trouble of getting an Epilog through airport screeners… imagine having one of these on your back. Not sure you’d live through the experience!